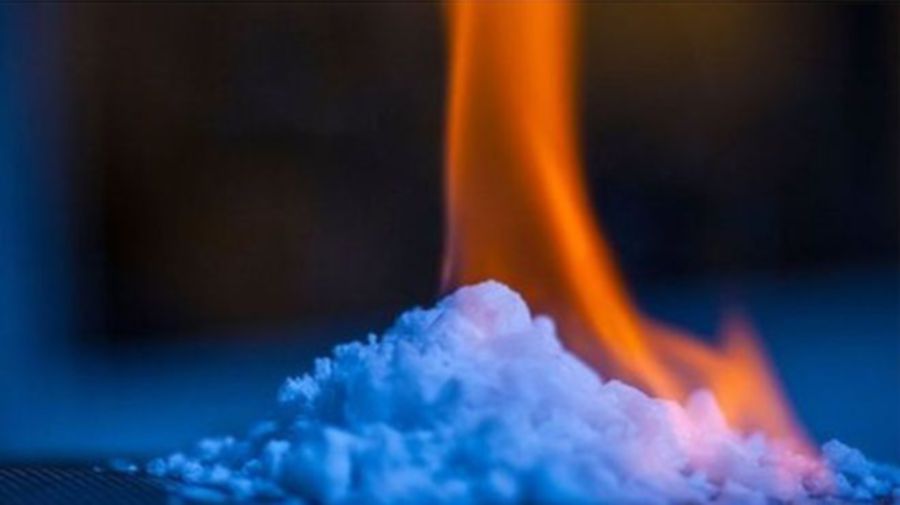 (Methane hydrate, pictured, is also known as fire ice and is a highly energy-intensive. Source: ALAMY.)

As countries in the Asia region grapple with meeting future energy demands, many are looking to a new energy frontier of natural gas – predominantly methane – frozen under the sea and in permafrost regions.

Japan, South Korea and China are emerging as global leaders in developing considerable regional reserves into a potential energy source. The Nankai Trough south of Japan, contains an estimated 50 trillion cubic meters of methane, a significant amount in light of government projections that 1.1 trillion cubic meters could satisfy Japan’s natural gas consumption for 14 years. Similarly, South Korea has discovered significant deposits off its eastern coast, estimated to be up to 600 million tons, which could satisfy demands for up to 30 years. In China, the  recently uncovered reserves in the Qinghai-Tibet plateau have been hailed as comparable to the discovery of the Daqing oilfield as the reserve could satisfy consumption for up to 90 years. Although there are significant geological and environmental challenges in harvesting the gas, all three countries anticipate commercial extraction within the next 5 to 10 years.

If a significant portion of the methane can be captured and utilized as energy, this resource has the potential to alter the regional energy landscape. For the worlds’ top two natural gas consumers Japan and South Korea, it can alleviate dependence from imports, particularly shipments through the Malacca Strait chokepoint. Their existing natural gas infrastructure and high demand volumes will allow them to maximize the benefits from investing in new natural gas resources in their neighborhood.

While China’s energy outlook is expected to be dominated by coal and oil, natural gas holds an increasing share in the country’s energy mix. In 2008, China became a net importer of natural gas and demand is projected to triple by 2030. It has also been investing in import facilities and improving its domestic gas network. For China, the newly discovered methane reserves can offset reliance upon shipped imports, although it is unlikely to replace imports from the recently unveiled Central Asia pipeline due to geopolitical considerations. In the long term, the domestic methane reserves also represent an opportunity to fulfill China’s national goal of capitalizing on indigenous energy resources.

Although championed as the “gas resource of the future”, frozen methane also presents a climate change hazard. If released into the atmosphere, methane is 25 times more potent than carbon dioxide as a greenhouse gas. Even when used as energy, carbon dioxide remains the end product of methane processing. Whether as an energy savior or climate disaster, frozen methane is poised to change the region’s global energy and climate change outlook.