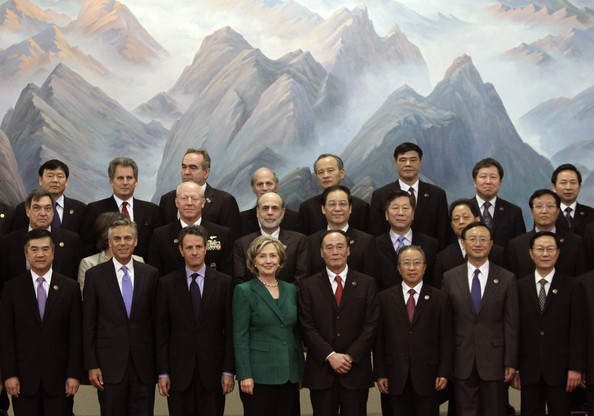 (National leaders on the first day of the U.S.-China Strategic & Economic Dialogue 2010. Source: Department of State.)

The US-China Strategic and Economic Dialogue (S&ED) that wrapped up in Beijing yesterday should lead to the coining of a new diplomatic maxim: the bigger the delegation, the smaller the results. The State Department’s outcomes document from the Dialogue is a laundry list of 26 items that most likely could have been “accomplished” without sending 200 US officials — including 15 Cabinet secretaries and agency heads — to China for several days of high-profile, low content meetings. Meanwhile, on the really important strategic and economic issues that should occupy center stage — Iran, North Korea, global economic imbalances — there appears to have been little movement despite persistent claims of a successful dialogue from both sides. In fact, China’s equivocating response to North Korea’s unprovoked sinking of a South Korean naval vessel is a good example of the continued wide gulf in the strategic considerations of the two countries.

While the Obama administration has hailed the S&ED — a combination and dramatic expansion of two parallel high-level Bush-era dialogues with China — as one of its “signature institutional innovations”, other commentators have offered less flattering assessments. In an article hailing the end of “G2” thinking in the Obama Administration, leading China thinkers Elizabeth Economy and Adam Segal from the Council on Foreign Relations advocate downsizing and refocusing the S&ED back to the truly strategic issues. Joshua Cooper Ramo, who coined the term “Beijing consensus” to describe the growing influence of China’s economic and political model, goes further and calls for the S&ED to be abandoned altogether. He likens it to “an annual parent-teacher conference with China” that is too large and slow to deal meaningfully with the rapid and diverse challenges the US-China relationship encompasses. Instead, Ramo suggests a more flexible and fluid approach, with a “ruthless defense of American interests as the starting point.”

There are merits to both of these approaches to fostering more effective bilateral engagement, but the more important aspect of their analyses is the emphasis on the inherent structural constraints on US-China relations. As the latest round of the S&ED ends with more pomp than substance, it is a good time to evaluate not only the means to engage China, but also the underlying expectations about the quality and ends of that engagement.