A New Narrative for the U.S.-Japan Alliance 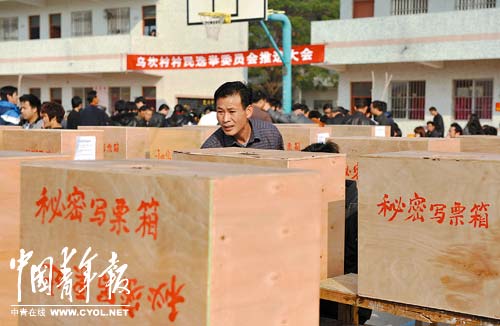 Wukan—a small fishing village in Guangdong Province along the South China Sea—has been the darling of international media ever since an angry throng of villagers smashed several village office windows and even attacked the local police station on September 21, 2011. Following a five month long standoff between protestors and local police, on February 1, provincial authorities permitted Wukan to hold an election and select members to form an election committee. The eleven-member committee will organize and supervise the upcoming village chief election, scheduled for March 1. While the election committee has been the object of recent focus, a closer look at the political jockeying that has taken place between the local and provincial and local and central leadership may prove more instructive of the incident’s wider implications. So what can the “Wukan effect” tell us about the relationship between local, provincial and central officials?

In September 2011, villagers in Wukan first took to the streets to protest the low compensation for farmland requisition and then they established “Wukan Village Temporary Council Committee”, which was constituted to negotiate with the Lufeng municipal government. Scuffles broke out between local police and demonstrators, and the conflict quickly spiraled out of control when one of the board members of the temporary council committee, Xue Jinbo, died in custody owing to heart disease. A breakthrough came about when Guangdong’s Party Secretary Wang Yang, instead of brutally suppressing the strikes, allowed villagers to hold elections. People’s Daily, the flagship newspaper of the Chinese Communist Party (CCP) praised his moral authority. Secretary Wang, who is generally viewed as relatively more liberal among China’s political cast, described the Wukan Incident as both “accidental and inevitable.” Presumably, what Wang meant is that the incident was “inevitable” because China’s economic and social development left many problems unaddressed, particularly in the rural areas and “accidental” in the sense that the government’s social and economic policies were intended to reach urban and rural areas; coastal and inland peoples, and bring prosperity to all of China. Wang believed that the government should act “responsibly” [ed. emphasis added] and that the administration must deal with such conflicts directly. Consequently, he established a provincial-level working group under the leadership of Guangdong’s Vice-party Secretary Zhu Mingkuo. According to Wang, “the provincial working group in Wukan will not only ‘settle’ the incident, but it will also provide reference to improve village-level administrations in Guangdong.”

In sharp contrast to Wang’s handling of the dispute, local government officials in Shanwei and Lufeng first labeled the incident as a “riot incited by foreign subversives.” In line with this thinking, the Financial Times quoted an unnamed senior Chinese leader stating: “it would be better for a clear directive from the central authorities to over-react rather than to fall short.” According to a member of the Chinese People’s Political Consultative Conference, other provincial officials complained that Mr. Wang set a terrible precedent since other people in protests could demand a similar response.

Yet, most Chinese news reports extolled the peaceful resolution of the incident. Perhaps inspired by what happened in Wukan, villagers in Guangzhou (capital city of Guangdong) and Wenzhou in Zhejiang reportedly demonstrated against their respective villages’ party secretaries and accused them of corruption. A “Wukan Effect” appears to be materializing. Optimists argue that Wukan provides a democratic model for China because it allows villagers to organize local elections for new village leadership in a process that is not entirely controlled by the CCP. More importantly, the Wukan model could serve as a useful mechanism for the peaceful resolution of the growing number of disputes between local officials and citizens in rural areas. Interestingly, there are in fact very few pieces of news about village protests reported by Chinese official media and nor did provincial party secretaries make any comments.

During a visit to a village in Guangzhou on February 4, China’s Prime Minister Wen Jiabao proclaimed that “farmers’ rights must be protected,” and in response to widespread dissatisfaction with local officials Wen emphasized the importance of “maintaining direct elections at the village-level”. Prime Minister Wen’s statements were widely seen as an indication of high-level support for Wang’s practice in Wukan. So does the government’s handling of the Wukan incident indicate that the CCP’s top echelon is becoming more open-minded toward democracy? Although protests against village officials occurred in several rural villages following the Wukan incident, none successfully appealed for direct elections to replace incumbent village chiefs (as in Wukan). So Wukan appears to be more of an exception rather than the rule thus far. In fact, most uprisings were suppressed by local governments except any provincial intervention. Yet as China continues to economically develop, the concomitant growing political pressure on the political leadership raises the interesting question of whether the central government will grant provincial governments permission to handle protests against village officials’ corruption by holding direct and impartial elections.