Who will be in the Next Central Financial and Economic Leading Small Group? 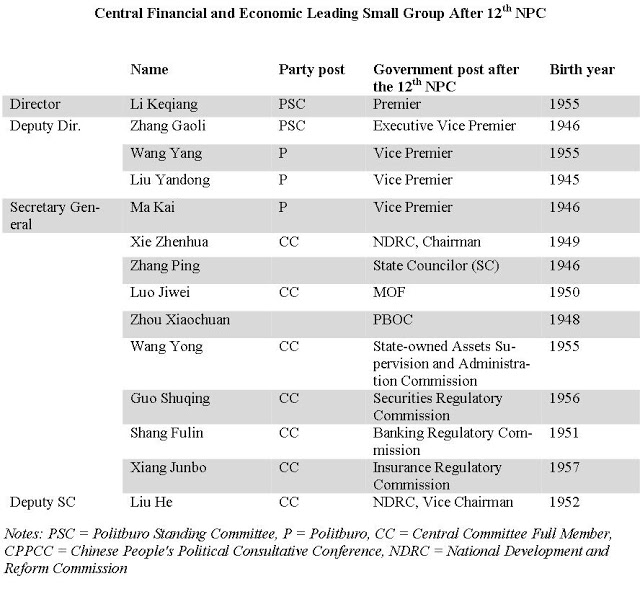 We may be going out on a limb here – but what the heck. With the annual session of the 12th National People’s Congress (NPC) less than two weeks away (on March 5), the China-watching community has been buzzing about who will assume future government leadership posts in the People’s Republic of China.

The upcoming NPC meeting(s) – separated by four frantic months of speculation for China watchers – dovetails the Chinese Communist Party (CCP) 18th Party Congress in November 2012 that handed the dragon head baton for the top Party leadership posts to its Fifth-generation leaders. The carefully sequenced and orchestrated Party-State leadership transitions continue to underscore the Party’s dominant role in the Chinese political system (arguably from which everything else follows).

This annual conclave stands out also because it will reveal a new cabinet, including the premier (which is a gimme), vice-premiers, state councilors, and ministers. More importantly, the turnover will mark the official handover of administrative control of the State from Hu Jintao and Wen Jiabao to Xi Jinping’s and Li Keqiang’s administration. However, with all the fuss about who’s going to have what portfolio in the Politburo, little attention has been paid to memberships in a key body called the “Central Financial and Economic Leading Small Group” [中共中央财经领导小组] [1], which advises the Party Politburo on economic policy and coordinate implementation of policy decisions.

Now, let’s get something straight: Only the most senior party members and some party elders in Zhongnanhai are privy to know and decide who will actually [emp. added] be the next heads of these coveted top-level government posts included in this small group and others like it. For instance, the story about whether or not PBoC Governor Zhou Xiaochuan will step down as the head changed several times in just the past month, with the latest report indicating that the Party elders agreed to have him stay for another year or maybe two.[2] As our exercise suggests, and given the central authorities dogmatic pursuit for stability, precedents also seems to have a role and do matter in Chinese politics.

So assuming as premise that precedents do matter: Incoming premier and second-in-command within the CCP’s Politburo Standing Committee, Li Keqiang – who will control domestic policy including economic policy – will therefore take over the position as the director of the leading group. The new executive vice premier will take the position as the deputy director. The secretary-general will likely be the vice premier with the portfolio for finance and economic development. All four vice premiers (including the executive vice premier) will be represented in the group. Other members will include the chairman as well as vice chairman of the National Development and Reform Commission, and the State Councilor who will likely be serving as the secretary-general at the State Council, including the heads of the Ministry of Finance, People’s Bank of China, and four regulatory bodies: SASAC, SFC, SRC, and IRC

We know that our line-up is one of many possible scenarios that may result in this key body (and may resemble a game of musical chair) – but what’s work if you can’t have a little fun? [3]
L.C. Russell Hsiao is Senior Research Fellow at the Project 2049 Institute. Mark Stokes is the Executive Director of the Institute.
[Note: We feel it necessary to pay our respects to the giants in the field of future leadership analysis, such as Alice Miller, Barry Naughton, Cheng Li, Bo Zhiyue, Willy Lam, and James Mulvenon, among others, whose seminal works helped informed our guestimate – we are solely responsible for its inaccuracies.]

Mark Stokes is the Executive Director of the Project 2049 Institute. L.C. Russell Hsiao is a senior research fellow at the institute.