Taiwan’s Naval Role in the Rebalance to Asia 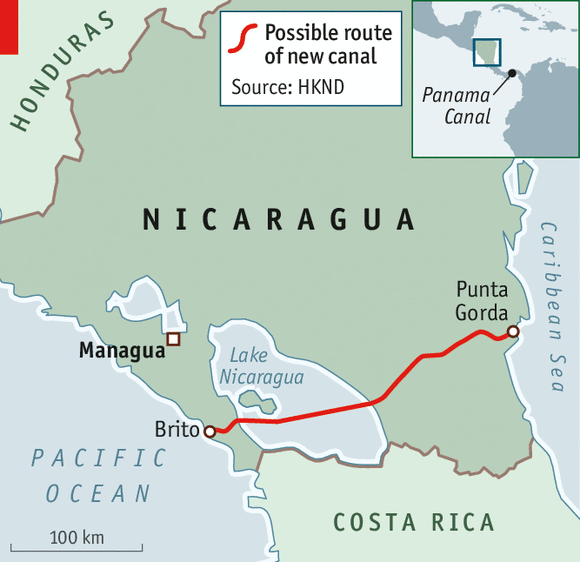 On December 22, 2014, a groundbreaking ceremony was held in the small city of Brito on the Pacific coast of Nicaragua, marking the start of construction on the Grand Canal of Nicaragua—the world’s newest megaproject. The construction is being headed by China through the newly established Hong Kong Nicaragua Canal Development Investment Company (HKND), led by Chinese businessman Wang Jing. The massive project will span 172 miles and cost upwards of USD 50 billion. The construction plans include ports, power plants, and a bridge over the canal for the Pan-American Highway, as well as proposals for an international airport, free trade zone, and two concrete factories.

China is currently working to increase its influence in Latin America; a region the United States has traditionally considered its sphere of influence. While the canal could act as a major stepping stone in balancing against the U.S. “pivot” to the Asia-Pacific region, using the canal in this way is ultimately a double edged sword. Completing the canal’s construction could potentially bring economic and strategic benefits to China and Nicaragua, as well as strengthen China’s ties with Latin America; or, depending on the canal’s impact on the environment and economy in both Nicaragua and its neighbors, the canal’s construction could inflict significant damage on Chinese-Latin American relations.

This canal project is just the latest of Chinese attempts to increase its influence in Latin America. Recently, Xi Jinping announced plans for investments in the region to reach USD 250 billion in the next 10 years, with projections for trade between the China and Latin America to reach USD 500 billion. In addition to the canal, massive infrastructure projects are being discussed or are under construction throughout Latin America, including twenty-two dam projects and a transcontinental railway. Military engagement between China and Latin America has also been on the rise, mostly to promote good will in countries that are business partners with China. Many of the loan agreements between China and Latin America have very few conditions attached unlike agreements forged with western monetary institutions, making working with China an attractive opportunity.

Value of the Canal for China and Nicaragua

The completed canal is intended to capture the market of triple-e class container ships which the Panama Canal, even with its expansion, would be unable to handle. The Chinese would have the only avenue into the Atlantic which could accommodate these larger ships and could leverage that position to its benefit. The agreement between Wang Jing and Nicaraguan President Ortega also includes a concession to secure HKND’s ownership of the canal, facilities, and lands surrounding the canal for the next 50 years, with the option of renewing for another 50 years. According to experts, having a Chinese company operate the canal in a country that is not strategically aligned with the U.S. eases Chinese fearsthat the U.S. can block Chinese warships from the Atlantic. Unlike the Panama Canal, the Nicaraguan canal would be free from neutrality agreements. Chinese canal ownership also secures an avenue for China’s energy shipping from the Atlantic, potentially from off the coast of West Africa or Brazil.

For Nicaragua, the canal would catapult Nicaragua’s development forward similarly to how the Panama Canal launched Panama’s development. The canal would create thousands of jobs and put Nicaragua on track from being the second poorest nation in the western hemisphere to one of the region’s fastest growing economies, with a projected 14.6% annual growth rate. A canal that brings economic benefits to Nicaragua may entice other Latin American states to cooperate with China in the future, making the canal a worthwhile investment.

Criticisms and Impacts on Chinese Interests

Despite the canal’s potential benefits, there is also a chance the canal’s construction would obstruct Chinese and Nicaraguan interests. Domestic and international critics, including Nicaragua’s neighbor Costa Rica, fear the canal would pollute Lake Nicaragua, a major source of fresh water to Nicaragua and neighboring countries. The planned route also runs through an area with an active hurricane belt, volcanoes, and seismic activity which could further damage the canal, increasing canal costs and deterring shippers from using the riskier route. Furthermore, Colombia has expressed concern over the potential influx of commercial ships operating near disputed maritime territory with Nicaragua. Angering Nicaragua’s neighbors would be detrimental towards China’s pivot to Latin America.

Social impacts to the Nicaraguans may also lead to trouble. Around 30,000 Nicaraguans and indigenous tribesmen live along or near the proposed canal route, but no details have been released about relocation plans or compensation. Only half the labor working on the canal project is going to be Nicaraguan, with Chinese labor and foreign specialists comprising the other half. With growing protests from the Nicaraguan population, this labor divide could further exacerbate the problems between the Chinese and Nicaraguan people due to anger over lost jobs and an influx of Chinese immigrants. Many Nicaraguans also claim that President Ortega rushed the deal through the National Assembly just to sell the country to the Chinese, diminishing Nicaragua’s national sovereignty.

As the U.S. seeks to renew its focus on Latin America, China hopes the canal will increase its sway in the region, not just for the economic benefits but also as a means of demonstrating to the U.S. that they, too, are able to play in another’s backyard. However, even if the canal is not completed, the United States must not become complacent. The canal is far from the only tool in China’s repertoire to advance China-Latin America relations. And while the United States has recently taken steps to mend its relationship with Latin America—mostly notably the decision to normalize relations with Cuba—unless the United States makes significant advances in courting its Latin American neighbors, the U.S. may find itself with a China that is too close for comfort.