The Intersection of HADR and the Rohingya Refugee Crisis

US South China Sea Policy: The Case for UNCLOS 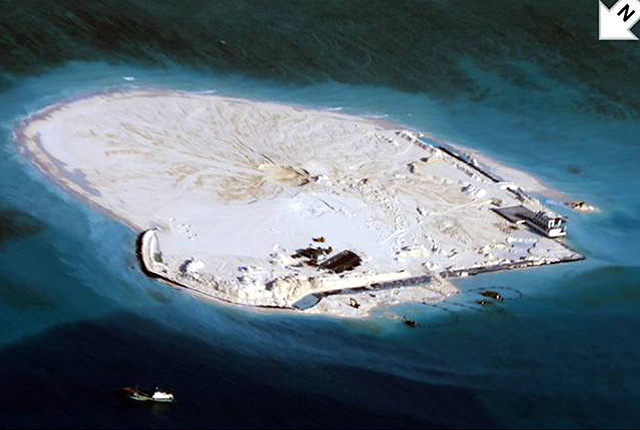 Since 2012, the People’s Republic of China (PRC) has embarked on a vast land reclamation project and artificial island building program throughout much of the South China Sea (SCS). The most extensive reclamation has included increasing the size of islands within disputed chains such as the Spratly Islands off the western coast of the Philippines, as well as the buildup of “artificial islands” on top of previously uninhabitable rocks and reefs. The PRC has pursued a strategy of fait accompli in the region, literally creating facts on the ground as part of a larger strategy to assert claims within its 9-dash line.  Thus far, Beijing has been committed to completing its expansion and island building without inciting or being forced into armed conflict. But as the People’s Liberation Army (PLA) and Navy (PLAN) continue to build on 7 disputed islands, rocks and reefs throughout the SCS, the looming question of how the US can or should respond has become a focal point of US-PRC relations. Up to now, the US has pursued a policy whereby it has refused to “take sides” in the territorial disputes but has instead suggested that all sides seek a diplomatic resolution based on the principles of the law of the sea.  More recently the US has asserted that PRC activity in the SCS is in clear violation of its obligations pursuant to the UN Convention on the Law of the Sea (UNCLOS). However, the legitimacy of this argument is undercut because the US itself is not a ratifying party to UNCLOS. Therefore, in addition to many other compelling factors for the ratification of UNCLOS, recent events have made ratification more crucial in order to bolster US legal standing vis-à-vis Chinese actions.

The US must take a strong stand in the region for a variety of reasons, including protecting the $5.3 trillion in world trade that passes through the SCS each year and responding to pleas from allies to help protect their own sovereign interests. Perhaps most importantly, the US cannot allow Chinese aggression in this critical geostrategic area to advance unchecked. Much of the reason that the US has not yet felt a real pressure to ratify UNCLOS is that opponents of the treaty claim it is unnecessary. They argue that the US has been served well by a Reagan administration policy decision that the provisions of UNCLOS dealing with FON are reflective of customary international law and thus the US has no reason to be bound by other more onerous provisions.  However, since the essence of the US argument is that PRC expansion is in violation of UNCLOS, the time may be ripe to reassess the advantages that might inure to the US should it ratify the treaty.  Specifically, would UNCLOS ratification actually bolster the legitimacy of the US position vis-à-vis the PRC? If China’s advance continues, and China is allowed to dictate the terms of navigation in the SCS it would be well on its way to achieving its goal of supplanting US hegemony in the region.

Chinese efforts to build extensive artificial islands have changed facts on the ground that do not conform to the standards of international maritime law prescribed in UNCLOS, which the PRC ratified in 2006. The PRC’s 9-dash line asserts that over 80% of the SCS is sovereign Chinese territory based on “historical and legal” grounds. Under this overarching claim, the PRC has deemed it “justified, legitimate, and reasonable” to build within the line. Because several countries, including the Philippines, Taiwan, Vietnam, and Brunei claim ownership of various SCS islands, the US has requested that all claimants cease land reclamations in order to mitigate the escalation of tensions in the region. The PRC has repeatedly flouted this request and stated that the US has no right to intervene in Asian affairs, and no jurisdiction to get involved with territorial disputes by invoking UNCLOS. While it is true that UNCLOS contains no provisions for the settlement of sovereignty disputes and lacks enforcement mechanisms, it is equipped to rule on the legitimacy of maritime claims asserted off of these islands. At the Shangri-La Dialogue, Secretary of Defense Ash Carter defended the US right to be involved in the dispute as a, “Pacific nation, a trading nation, and a member of the international community.”

Under UNCLOS, coastal nations are allotted a 12 nautical mile (nm) territorial sea (TTS) along with a 200nm Exclusive Economic Zone (EEZ). Foreign ships, both military and civilian, are allowed innocent passage through the territorial sea while ships and aircraft are free to operate in the waters and airspace outside the TTS to include conducting naval exercises and gathering intelligence. The PRC has frequently attempted to make US Naval operations difficult in parts of the SCS that it considers a part of its EEZ. Another part of the overall issue regarding the territorial dispute in the SCS revolves around which nation enjoys certain rights within their claimed EEZ’s.  Whoever “owns” an island also has rights to the natural resources within the EEZ surrounding that island such as fish, oil, minerals, and natural gas. Under UNCLOS, disputed maritime claims need to be multilaterally agreed upon by the countries in question, as opposed to the PRC invoking sovereignty based on the ever-ambiguous 9-dash line.

Furthermore, it will be interesting to see what rights the PRC attempts to assert over the artificial islands it has built; UNCLOS specifies that artificial islands or rocks incapable of sustaining human life are not entitled to either territorial waters or an EEZ. At Shangri-La, Secretary of Defense Carter made it clear that, “turning an underwater rock into an airfield simply does not afford the rights of sovereignty or permit restrictions on international air or maritime transit.” China has not explicitly claimed territorial waters or EEZs around the artificial islands, but is very likely to regard them as such because it considers everything within the 9-dash line its sovereign territory.

China’s claims to the South China Sea fall outside the scope of international law. The question then, is what the US can do to deter an aggressor that is comfortable with stepping over legal boundaries and making claims that most of the international community deems illegitimate. Though solving the problem and managing excessive Chinese claims in the SCS will undoubtedly be a many-step process, the next move that the US should make in this political chess match is ratifying UNCLOS. Although the US already adheres to the navigational provisions of UNCLOS as a matter of policy, actually ratifying the document provides a sturdy legal leg to stand on when denouncing Chinese sovereignty claims. Ratifying the convention assures others that the US is willing to play by the same rules that it is trying to enforce, while not doing so at best weakens its legal argument and at worst strips its legitimacy in making policy towards the South China Sea entirely. Because the United States has taken a rules-based approach in framing the issue, it is essential that it be bound to the same legal framework as every other country involved.

Ratifying UNCLOS would also give the US legal standing to protest Chinese assertions such as a “military alert zone.” This term was used by the PLAN on August 20, 2015 when a US P-8A Poseidon surveillance plane flew a routine mission over contested islands in the SCS, and was asked to leave. The US pilot responded that he was flying through international airspace in accordance with international law. Like territorial waters, a state’s airspace extends 12 nm past its borders. However, unlike territorial waters, foreign planes are not allowed to enter another country’s airspace without permission. The US is careful not to fly within 12nm of any of the disputed islands within the SCS, not necessarily because it is acceding that it is Chinese sovereign airspace, but because it is somebody’s airspace. The question remains; what exactly is a military alert zone? The term does not appear and is not defined under international law. If the US were a ratifying party to UNCLOS it would strengthen its argument that the Chinese use of ambiguous terms such as “military alert zone” to impede freedom of navigation does not comply with international law.

The move also would be highly appreciated by US allies in the Asia-Pacific, as ratifying UNCLOS would be a concrete show of commitment to the region and would solidify the US role as a legitimate international leader with a vested interest in easing tensions. Ratifying the treaty provides the US Navy legal basis to peacefully travel through Chinese territorial seas—a right that it already asserts, but would be strengthened by becoming an official party to UNCLOS.  Finally, ratifying UNCLOS could provide a way for the US to impose cost and penalties on the PRC when they break international law through litigation in the International Tribunal on the Law of the Sea (ITLOS).

Why has the US refused to sign a treaty that is in US national interests? The answer lies in the original drafting of the document during the Reagan administration. After the plan was drafted, President Reagan refused to sign based on various objections, particularly that it could subordinate the US government to agencies such as the International Seabed Authority (ISA) created under the purview of UNCLOS. This objection was cleared up in 1994 when a revised version of UNCLOS provided the US and other countries with the power to veto ISA decisions. Many Republican Senators today who oppose UNCLOS still cling to the argument that Reagan disapproved of the treaty, and trumpet the false notion that US sovereignty would be compromised.

Throughout the years UNCLOS has been supported by an impressive collection of officials, including the Clinton, Bush, and Obama administrations; every Chairman of the Joint Chiefs of Staff; military legal experts; The Chamber of Commerce; “Big Oil”; “Big Labor”; environmental activists; and the National Association of Manufacturers. In addition to providing the necessary and relevant leverage in the SCS for US forces, UNCLOS would help to ensure that the US gains exclusive access to the resources of its own North American continental shelf beyond the 200nm EEZ that is already asserted, which could potentially boost the commercial viability of oil companies and create jobs. In addition, ratifying the treaty would ensure the US a place at the table with other the Arctic countries when discussing the distribution of the resources made available by the melting of the polar ice cap. Furthermore, the treaty sets environmental guidelines in the world’s oceans. It is clear that becoming a ratifying party to UNCLOS would be sound strategy for the US in both economic and security terms.  The current administration should prioritize the ratification of this treaty, especially now when it is needed the most.