The Nature of China’s Rise and Why It Matters to the U.S. and Japan: A Japanese Perspective 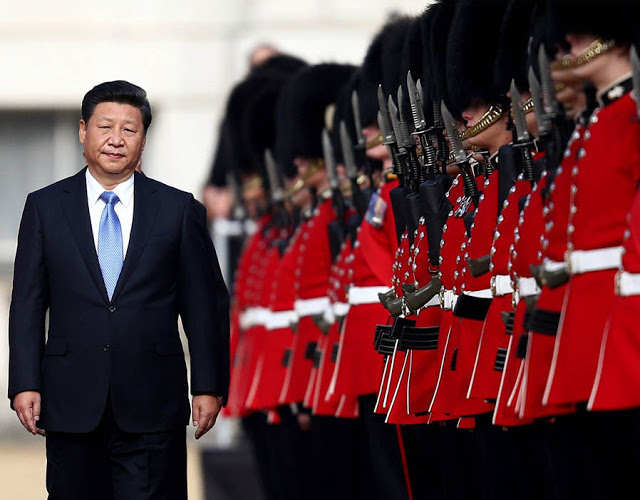 As the United States and Republic of Korea (ROK; or South Korea) deepened their alliances during President Park’s visit to Washington in late October, both through reaffirmation of strength of the alliance and through continued security cooperation, media sources in the People’s Republic of China (PRC; hereafter, China) were planting doubt about the longevity of the U.S.-ROK relationship. Similarly, during General Secretary Xi Jinping’s recent visit to the United Kingdom (UK), Chinese media portrayed the UK as caught between two allies, one on the rise and one in decline. One article at a time, through Party-run media outlets, the Chinese Communist Party is eliminating middle-ground solutions for complex diplomatic relations for U.S. allies.

Propagating a zero-sum fallacy, also referred to as a “false dilemma fallacy” is a choice Chinese media warfare tactic. Chinese media, referencing guidelines from the Publicity Department of the Communist Party of China (CCPPD), regularly constructs current international events as scenarios with two choices, rather than a range of policy options. This institutionalized persuasion method is aimed at driving a wedge between the U.S. and its key allies by using zero-sum rhetoric, creating the illusion that allies must choose between the U.S. and China. Domestically and internationally, Chinese state-run media achieves this goal by using “foreign experts,” some of whom are influenced by or have significant interests in the Party, and some of whom are unaware they are being quoted or whose quotes are taken out of context. Unsurprisingly, the Chinese publicity apparatus also overemphasizes points of view that support the Party narrative.

Chinese media coverage of President Park’s visit to the U.S. as well as General Secretary Xi’s visit to the UK offer prominent examples of the “false dilemma” framing tactic and its implications for U.S. policy.

President Park’s Visit to the U.S.

The ROK and China have seen much progress in relations over the past decade. China is South Korea’s largest trading partner, has hosted President Park six times since 2013, and touted Park’s attendance at Beijing’s military parade in September. But the U.S. and South Korea share an alliance, robust economic relationship and democratic and free-market values. According to the White House Joint Fact Sheet released after Park’s visit, the two allies worked to strengthen cooperation in the following areas: defense of the Korean Peninsula, South Korea’s development of its own “Kill-Chain” preemptive strike system, South Korea’s potential membership in the TPP and countering China’s aggressive maneuvers in the South China Sea. Considering the dynamic nature of both relationships, it is in the ROK’s interests to nurture relationships with both the U.S. and China.

Chinese media paints a different picture. There is a large gulf between the “win-win” rhetoric of Chinese diplomats and China’s media coverage of South Korean foreign affairs. During a press conference on Park’s visit on October 16, President Obama urged Park to “speak out” when China violated international norms. Initial media uproar from Chinese and South Korean sources alike prompted the Park administration to defend the comments, citing Obama’s principled concern with upholding international law. Chinese media sources, however, were quick to parse the perceived face-off between China and the U.S. over South Korean alliance. Articles with a wider focus attributed Obama’s comments to the U.S.’ growing unease over stronger China- South Korea relations. Carefully selecting quotes from Korean news sources, the articles both validated the negative effect of stronger China-ROK ties on ROK-U.S. relations. Then the articles followed with praise of the historic trend of ever-strengthening China-ROK relations that began prior to President Park’s time in office. Others were more biting, citing South Korea’s security dependence on China as evidence that even under an assumed China-US dichotomy, South Korea would have no choice but to side with China for nuclear negotiations with North Korea.

While the stronger ROK-China relationship has “raised eyebrows” in Washington, the alarmist narrative of South Korea’s growing relationship with China at the expense of its relationship with the U.S. was not U.S. media’s primary focus following President Park’s visit. Reporting on the same press conference referred to above, U.S. media emphasized the possibility of the ROK maintaining strong partnerships with both the U.S. and China. During the same press conference mentioned above, in addition to his comments on the South China Sea issue, President Obama also stated, “There’s no contradiction between the Republic of Korea having good relations with us, being a central part of our alliance and having good relations with China.” Chinese media neglected to report this caveat. It’s clear that though South Korea may be fostering closer relations with China, its current partnership with the U.S. is indispensable, and due to its strategic interests, it is unlikely that Korea will ostracize one ally in favor of the other.

Chinese Party-run media used similar tactics to frame Xi’s October 20-23 state visit to the UK. Utilizing another tactic of highlighting favorable perspectives that the Chinese media deems beneficial to China’s international interests, media reports promote the friendly views of its “foreign friends.” A long-standing tool dating from China’s Maoist propaganda roots in Yan’an, the tactic of “borrowing” foreign news sources allows the PRC to raise awareness of its narrative on a credible platform while increasing the efficiency of that narrative’s dissemination (Brady 2015).

For example, an article published during Xi’s visit titled “China is rising, America is declining, England is choosing,” was indicative of the CCP’s promotion of false dilemmas. Even more telling is the source. The named article was a translated version of Martin Jacques’ commentary in the Guardian where he argued that Britain cannot afford to pass up economic cooperation with China. The English version is illustrative of Chinese influence operations in itself, as Martin Jacques is a prominent China proponent and was once editor of Communist Party of Great Britain’s journal, Marxism Today. The translated version, of course, makes some changes, editing out Jacques’ human rights concerns and any doubt whatsoever about an existing dichotomy.

Implications for the United States

The prominence of Chinese media’s “false dilemma” messaging strategy, as well as China’s specific methods for implementing this tactic calls for increased awareness of media agencies’ funding sources, credibility and background of sources quoted in media coverage. Conventional knowledge expects the Chinese government-backed publications to tow the CCP line, but U.S. audiences often take for granted China’s growing influence in non-CCP publications. Foreign audiences consistently fail to calculate the impact of Chinese propaganda, which exists not only in Chinese state-run publications, but also in rhetoric and ideas that trickle into publications around the world. Though subtle, the false dilemma narrative uses zero-sum language that creates a two-choice illusion, tacitly restricting policymaker options in maintaining alliances in East Asia. Ironically, the same government that accuses the U.S. of having a “deeply-rooted Cold War mentality” is using its media to make strides towards reconstructing such a policy environment.