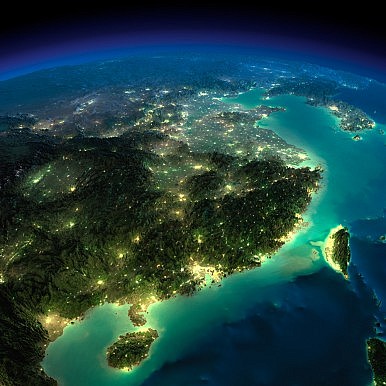 The Taiwan problem is not only a problem between the two sides of the Taiwan Strait; its overall development trend will also be decided by the East Asian-Western Pacific region’s great power relations, and by the region’s geopolitical situation.

Many seasoned observers of cross-strait relations might be surprised to know that the above quote comes from the study materials of the Chinese Communist Party’s (CCP) Central Party School – but they should not be. In an age where Beijing controls the narrative surrounding Taiwan as solely the domain of China’s internal affairs, it is important to remember that Chinese strategists have soberly assessed the geostrategic significance of Taiwan for hundreds of years, fully cognizant that it sits but 80-some miles off China’s coast and straddles both the East and South China Seas.

The late U.S. scholar Alan M. Wachman reminded the West of this in his influential 2007 book, Why Taiwan?. In that work, Wachman explains that Chinese dynasties viewed Taiwan as a protective barrier against foreign invaders, and as a threat to China’s security once controlled by outside powers. History shows that the danger posed to China from Taiwan was not merely symbolic: Ming loyalists used the island as a springboard for inciting rebellion in Qing China during the seventeenth century, the Japanese military launched operations against China from Taiwan during World War II, and Republic of China (ROC) raids were unleashed from Taiwan against Communist China during the Cold War.

Today, as Chinese projects power into the South China Sea and beyond, People’s Republic of China (PRC) analysts continue to view Taiwan’s U.S.-enabled de facto independence as a threat to the PRC’s national security and an impediment to China’s national greatness. On the contrary, a Taiwan that is united with the Mainland is described as a springboard to project power past the first island chain. Such views are apparent to those who peek just beneath the surface of the PRC’s rhetoric expounding the rationales of national humiliation, national unity, and territorial integrity for subjugating the island.

A common theme found in readily available Chinese writings is that Taiwan is the “key” to the PRC’s regional ambitions. Firstly, Taiwan continues to be described in CCP and scholarly sources as either a shield guarding China’s rich coastal underbelly or a danger to China’s regional security. Prominent Shandong University scholar Ma Fengshu (马风书) wrote in 2014 that Taiwan is the core of China’s most strategically-important area: its eastern geopolitical block. Ma assesses that this block is crucial for China’s economic development and also possesses the highest latent potential for conflict, given the area’s current U.S. domination and the perceived infringements on China’s territorial rights there. In order to deal with the threat of conflict, Ma states that China must overcome U.S. regional manipulation by fully exploiting East Asian states’ economic reliance on China, including Taiwan’s.

Similar ideas are professed by Zhang Wenmu (张文木), a scholar at Beihang University’s Center for Strategic Studies. In January 2016, Zhang asserted that China must adhere to Mao Zedong’s strategy to confront multiple complicated contradictions: first identify and address the main contradiction, and the rest will easily fall into place. Regarding China’s present territorial friction versus the United States, Japan, and ASEAN states, Zhang asserts that the main “contradiction” lies within the Taiwan issue:

Presently the East China Sea and South China Sea give rise to a good deal of hard-to-solve problems; their roots rest under the control of the Taiwan Problem. If China accomplishes the Taiwan Strait’s unification, the area between Taiwan Island and Hainan Island can form an expansive protection maritime region for China’s southeast economic golden zone, and in this way, the South China Sea issue’s resolution will become, relatively speaking, a lot easier.

Furthermore, Zhang explains that once Taiwan is unified with the Mainland, China will be able to project its military power east through the Miyako Strait – the largest pass through Japan’s Ryukyu Islands chain – and south through the Bashi Channel between Taiwan and the Philippines. The result, according to Zhang, would be the creation of a united naval defense zone sweeping from the Yellow Sea to the East China and South China Seas, linking China’s South China Sea islands with Taiwan Island and the Liaodong Peninsula. He states China’s power projection would also extend deep into the western Pacific, enabling People’s Liberation Army Navy (PLAN) nuclear submarines to realize their full counterstrike potential and allowing for the advancement of PLAN aircraft carrier construction.

A related concern for Chinese strategists pertains to Japan’s historical desire to control Taiwan as a protective barrier and transport node. Zhu Zhongbo (朱中博), a scholar at the Chinese Ministry of Foreign Affair’s think tank, wrote in 2015 that Japan desires to utilize Taiwan’s unique geopolitical position in order to secure access to the area’s transport and energy routes and assist its resurgent maritime strategy. Zhu accuses Japan of harboring secret plans to forestall and prevent Taiwan’s peaceful reunification with the Mainland. He points to the U.S.-Japan alliance’s expanding geographical area of military concern and the 2013 Japan-Taiwan Fisheries Agreement as evidence of malign intent. Zhang Wenmu puts forth similar warnings, stating that Japan aims to preserve access to the Taiwan Strait in order to advance its own South China Sea strategy. He even goes as far as to call the Taiwan region a core interest of Japan.

Even a preliminary open-source dive into Chinese language material shows that knowledgeable and government-affiliated PRC experts continue to view the Taiwan issue as not merely an internal matter, diplomatically sealed off from the world by Beijing’s One China policy. Indeed, it is viewed as a matter of grave geostrategic significance in the context of Beijing’s larger regional interests. No doubt similar views exist within China’s foreign policy decision-making apparatus. In the words of the CCP itself:

By understanding the Taiwan problem’s long-term nature and complexity from a geopolitical and geostrategic viewpoint, our knowledge can become even more profound, and even more in line with objective reality.

David Gitter is an independent research consultant on Chinese politics and foreign affairs. Sign up for his weekly intelligence report Party Watch, to follow the latest activities of the CCP. This article was originally published in The Diplomat on March 11, 2016.