Covert Coverage: Xinhua as an Agent of Influence in the United States

Under the Radar: China’s Coercive Air Power in the Taiwan Strait 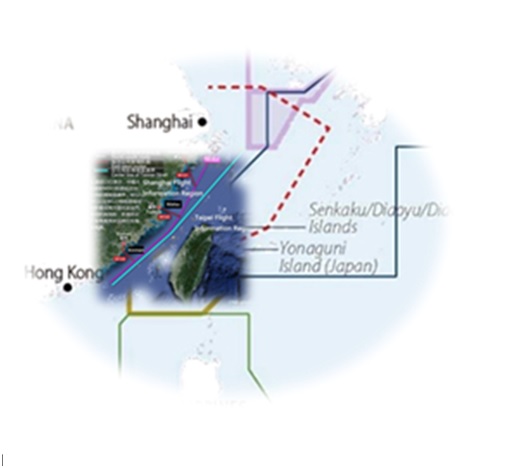 On January 4, 2018, the People’s Republic of China (PRC, China) unilaterally modified an aviation route near the centerline of the Taiwan Strait. The northbound routes on this M503 flight path violate the existing cross-Strait civil aviation agreements between each side’s respective authorities. Taiwan, and many members of the international community, view this as a coercion tactic by Beijing to limit Taiwan’s ability to operate effectively near its borders on matters of national security. Further complicating the matter is Taiwan’s exclusion from international organizations, such as the International Civil Aviation Authority (ICAO), which limits Taipei’s ability to voice its concerns without the assistance of informal allies. The move is part of Beijing’s long-term plan of forcing Taipei to the negotiation table on unfavorable terms. More alarming, however, are the implications for the future of airspace security in Taiwan, as well as America’s ability to exercise freedom of navigation around the island. In response to this occurrence, the Project 2049 Institute brought together a distinguished panel of security experts to flesh out the PRC’s coercive airspace management, Taiwan’s security, and implications for U.S. interests.

It is likely that China’s decision to adjust air routes in the Taiwan Strait was a military stratagem made with the specific objective of encroaching on Taiwanese airspace. Beijing’s unilateral authorization of northbound flights on the M503 route is not, as China’s State Air Traffic Control Commission (SATCC) claims, a civilian measure taken to relieve air traffic congestion. This is evident by the fact that the SATCC resides under the jurisdiction of the Central Military Commission (CMC), led by the Chinese Communist Party (CCP). This is a textbook example of Chinese influence operations aimed at coercing and limiting Taipei’s political leverage vis-à-vis Beijing. The M503 route is Beijing’s latest endeavor to coerce President Tsai Ing-wen  蔡英文 of Taiwan (Republic of China, ROC) to adhere to the 1992 Consensus, and, thus, the one-China principle, as defined by Beijing. This, however, would be a major move of concession for Tsai’s Democratic Progressive Party (DPP), and Beijing’s pressure is unlikely to yield this result.

To emphasize the uptick of political pressure on Taipei, the panelists discussed China’s failing Taiwan strategy. Beijing’s plan for eventual re-unification utilizes a “carrot and stick” approach backed by China’s strengthened military and economic capabilities, while simultaneously isolating Taiwan from the international community. The end goal would be to convince Taiwan and its citizens to seek benefits from China’s so-called “great rejuvenation” and opt to negotiate with Beijing.  This would effectively return Taiwan to Beijing’s jurisdiction under an agreement similar to Hong Kong’s “one country, two systems” model.  However, Beijing’s attempts to capture the “hearts and minds” of the Taiwanese people have largely failed due to (though not limited to) the following factors: Taiwan has never been under CCP rule; the ever-dimming outlook for democracy and political freedom in Hong Kong; and the occurrence of a prominent Taiwanese identity revolution.With a majority DPP government in Taiwan, Beijing has handicapped their agenda through attempts to manipulate Taiwanese domestic politics. Beijing’s “United Front” activities, which target and engage specific interest groups, unveil a deliberate attempt to weaken Taiwan’s democratic processes.

Rather than attempting to improve upon relations set under the KMT administration, Beijing’s reaction to President Tsai’s inauguration was to double down on political pressure and aggressive coercion tactics. This reflects Xi’s overall political ideology; in Xi’s view, Hong Kong and Taiwan are the last remaining holdouts needing to be converted to tightly controlled “police states” such as Xinjiang and Tibet. Political subversion, ethnic riots, and a slowing economy are Xi’s nightmares, as they are obstacles to his “great rejuvenation,” which is fast replacing economic growth as the new foundation for CCP legitimacy. The addition of the M503 route in the Taiwan Strait exemplifies Beijing’s inability to mend its failing Taiwan strategy, and displays its unsettling tendency to resort to confrontational tactics to achieve its political goals.

The PLA and Aviation Routes as a Coercive Tool

It has become clear that Beijing seeks to leverage its military influence to achieve two goals: 1) to consolidate China’s sphere of influence in East Asia; and 2) to decrease the presence of U.S. forces in the region. With the M503 northbound air route, the PRC is now taking steps to “weaponize civilians” in its pressure tactics against Taiwan. Flying commercial airlines over open ocean in the Taiwan Strait, as opposed to more secure routes that hug the shoreline, is a new step taken by China that is intended to heavily tax Taiwan’s air patrols in the region. What’s more, it increases the chance of a civilian or military aviation accident, a tragedy likely to trigger a diplomatic crisis.

As China’s military technology improves, so does its ability to engage in coercive campaigns against U.S. allies and partners. For example, the People’s Liberation Army Air Force (PLAAF) consistently flies routes over the Miyako Strait, off the east coast of Taiwan in the Philippine Sea, and over the Bashi Channel, all of which are of strategic importance to Taiwan’s security. To Taiwan these waterways serve as critical conduits for trade and military patrols, and act as Taiwan’s geographical connection to the outside world. It is vital for Taiwan’s security that both their military and civilian aircraft and watercraft can depart from the island without having to report to PRC authorities, which would be the case if these waterways were declared part of the PRC’s Air Defense Identification Zone (ADIZ). The Bashi Channel is particularly pivotal, as it marks the rim of the “first island chain,” a term used to demarcate the archipelago of states located on the rim of the East and South China Seas where the PLA seeks to establish exclusive dominion. For Beijing, it is paramount that the People’s Liberation Army (PLA) can operate–at will–across the channel. Another security matter is the location of submarine cables (specifically the APCN 2) in the Bashi Channel which support much of Taiwan’s Internet connectivity and usage of the World Wide Web. It is a matter of national security that Taiwan be able to maintain and secure its Internet connection.

Parallel to their physical presence, the PLAAF has learned to utilize social media to magnify their coercive operations. The PLA Daily, the PLA’s microblogging site, and the official PLA Twitter account regularly report PLA operations around Taiwan in a tactic of psychological warfare. For its part, Taiwan’s state and media outlets must be careful not to help accomplish Beijing’s agenda. It is in the interest of Taiwan and American allies in the region to develop more robust information sharing capabilities to monitor and track PLA activities; likewise, it would be advantageous for Taiwan and U.S. allies to avoid amplifying Beijing’s preferred perception of having an indomitable and pervasive military presence around Taiwan.

In accordance with this narrative, Xi has placed an emphasis on building a strong military capable of winning wars. To make up for a lack of combat experience, the People’s Liberation Army has conducted at least 45 military exercises per year, for the last two years. In addition, the PLA has made efforts to conduct rigorous land, air and naval training exercises close to India, Russia, Japan, Taiwan, and in the South China Sea. China has also enhanced its combat readiness by training with other countries in the U.S. Navy-led Rim of the Pacific Exercise (RIMPAC) exercises, and other multinational drills with China’s neighbors to the west. While the Chinese prepare their military for an active and permanent role in the region, coercive actions such as the M503 route help to deteriorate established norms, allowing the Chinese to displace the activities of other powers in favor of a continuous PLA presence.

Given China’s economic production capacity, effective control of information, and military capabilities, the PRC can interfere with America’s diplomatic and economic relationships on many fronts. Therefore, Taipei and Washington’s path forward must be to counter Beijing’s political efforts through a robust public diplomacy campaign that emphasizes freedom of navigation (FON), information flows, and the rule of law. The U.S. must make clear that America, Taiwan, and all members of the international community can fly, sail, and operate wherever international laws allow. Regarding the first island chain, the U.S. has an interest in ensuring that China respects international waters and sovereign territory. A free and open Asia-Pacific is indispensable for regional diplomatic stability and healthy trade relations. If China operates in a designated security zone, or territorial waters or airspace of another country, it must be internationally admonished by the U.S. and Taiwanese administrations.

Perhaps the most obvious role of the U.S. government vis-à-vis Taiwan is to increase arms sales to the island so that it may adequately maintain its defense. Coercive airpower operations by the Chinese provide justification for U.S. assistance in upgrading Taiwan’s air force. Taiwan has been trying to rejuvenate their air force for over a decade, as in evident in their interest in purchasing F-35s, and recent upgrades to F-16Vs. The PLAAF exercises, and, now, civilian air routes, require the ROC air force to be on heightened alert around the island–a prerogative that could wear down the aircraft and exhaust the crew currently in use. For example, in 2016 alone, the Japanese Air Self Defense Force (JASDF) had to scramble their fighter jets851 times in response to Chinese aircraft activity in Japan’s territorial waters. For Taiwan’s aging air fleet, that amount of activity would be challenging to sustain.

In addition to arms sales, encouraging high-level visits and dialogue between U.S. and Taiwanese officials would be strategic in countering coercive PLA activities. TheTaiwan Travel Act, currently awaiting President Trump’s signature, is a model example of progress. During the Project 2049 Institute’s event, Congressman Ted Yoho (R-FL), Chairman of the United States House Foreign Affairs Subcommittee on Asia and the Pacific, gave strong statements of support for Washington’s need to work with Taiwan to strategically balance against China’s coercive activities. According to Congressman Yoho, the M503 route authorization is “yet another example of China’s territorial aggression in [Taiwan’s] near waters.” The Congressman stated it was the role of the United States to “defend Taiwan’s international presence and our bilateral ties.” Congressman Yoho is sharply aware that Xi Jinping is committed to replacing the existing world order with his own narrative, and that this is something the U.S. has a responsibility to counteract.

“China has ramped up a full-court press against Taiwan via domestic media infiltration, military air power coercion [and by] revoking their participation in even the most benign international organizations…. if we do not stand up [to China] now, it will be that much more difficult, more costly, and more dangerous to Taiwan.”

With more than just a rhetorical commitment to Taiwan on the world stage, Congressman Yoho recently sponsored the bipartisan bill H.R. 3320, which passed the House of Representatives on January 9th, 2018. The bill guarantees Taiwan’s status as an “observer” in the World Health Organization (WHO). He also co-signed a letter in January to Chinese Ambassador Cui Tiankai, admonishing Beijing’s activities in the Strait. These are the type of deliverables needed to establish a clear message to Beijing that Washington does not kowtow to the interests of a foreign power. The U.S. has a responsibility to defend the free world (or “promote a free and open Indo-Pacific”).  China’s unilateral effort to disrupt the status quo of aviation routes in the Taiwan Strait requires a firm repudiation from the United States and its allies and partners.

Colby Ferland was an intern at the Project 2049 Institute where he focused on cross-Strait relations and U.S. security issues in the Asia Pacific. He received his B.A. in International Relations and Political Science from The George Washington University, with a year abroad at the London School of Economics.