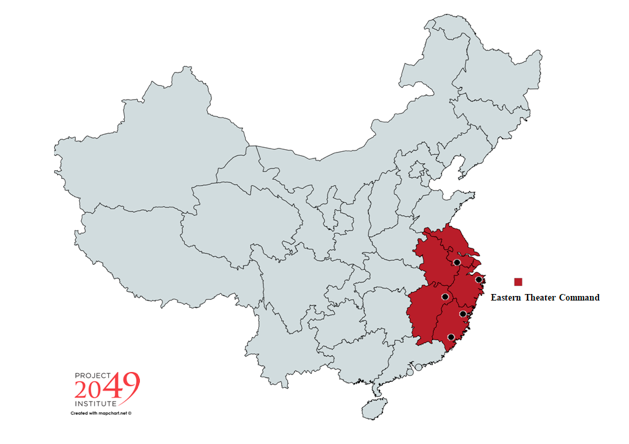 By: Rachael Burton and Mark Stokes |

The People’s Liberation Army (PLA) recently celebrated its 91st anniversary. By its 108th in 2035, General Secretary Xi Jinping, who is dual-hatted as chairman of the Central Military Commission (CMC), expects the PLA to have completed the modernization of its forces. By its 123rd birthday in 2050, the PLA should fully transform into a “world-class” military. In order to achieve these goals, the Chinese Communist Party (CCP) and the CMC aim to enhance the PLA’s strategic and combat capacity, and fortify party loyalty within the ranks of the military. At this current juncture, PLA reform and reorganization has stressed improvements in the operational capacity of the newly formed theater commands. The leadership of the five theater commands are tasked to not only follow the absolute leadership of the CCP, but also address shortfalls associated with its transition to joint-command operations.

The establishment of the PLA Eastern Theater Command (ETC; 东部战区) on February 1, 2016 marked a milestone in the security situation in the Taiwan Strait. In addition to Army, Navy, and Air Force components, the ETC exercises operational authority over the following Military Districts: Anhui, Fujian, Jiangsu, Jiangxi, Zhejiang, Jiangsu, Zhejiang, Fuzhou, and Jiangxi Military Districts, as well as the Shanghai Garrison.

While there has been speculation regarding reforms to the PLA rank system, grades remain the main marker. The following table charts the current PLA grade and rank structure:

The following are key PLA ETC officers responsible for preparing for use of force against Taiwan (Republic of China, ROC), and, by extension, the United States. Succeeding the Nanjing Military Region (NJMR), this command is a key player in directing political-military coercion against Taiwan. The ETC  is headquartered in Nanjing, the ETC Army in Fuzhou, the East Sea Fleet in Ningbo, and the Eastern Theater Air Force is based in Nanjing. 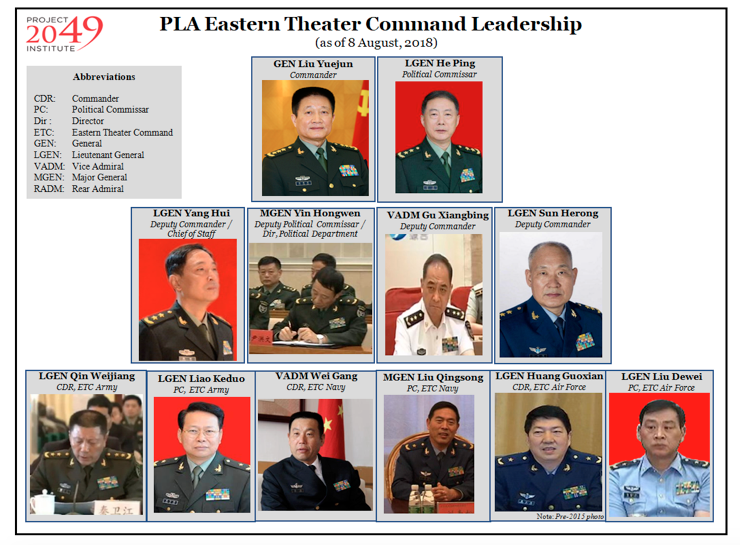 General Liu Yuejun (刘粤军 b.1954) was assigned as commander of the ETC in 2016. He previously commanded the Lanzhou Military Region (LZMR; 2012-2015), served as the LZMR Chief of Staff (2007-2012), and commanded the 42nd Group Army in Guangdong (2002-2007). Liu Yuejun reportedly commanded a company during the Vietnam border conflict (1979). He was promoted to the rank of General in 2015 and is a full member of the 19th Central Committee. His father reportedly is Liu Yide (刘义德), who was involved in political work with the 41st Group Army, where Liu Yuejun spent much of his early career with the 41st 123rd Infantry Division.

LGEN Yang Hui (杨晖b. 1963) was assigned as an ETC deputy commander in February 2016.  He is dual-hatted as Chief of Staff, directing the ETC’s Joint Staff Department. He previously served as NMR chief of staff (2011-2016) and directed the GSD Intelligence Department (2PLA; 2007-2011). He also served as deputy commander of the 31st Group Army (2006-2007), maintained a brief affiliation with the China Institute of International Strategic Studies (CIISS; 2005-2006), and served as deputy director of the GSD Technical Reconnaissance Department (3PLA; 2001-2005). He was promoted to MGEN in 2007 and LGEN in 2013, one of the first born in the 1960s to be promoted to this grade. He served as an attaché in PRC embassies in Yugoslavia, the Soviet Union, Russia, and Kazakhstan. Yang Hui studied in Yugoslavia, received his master’s and doctorate degrees on international security and strategy, and is reportedly an expert on counter-terrorism. He was an alternate member of the 18th Central Committee and 19th Central Committee.

Vice Admiral (VADM) Gu Xiangbing (顾祥兵 b. 1959) was assigned as deputy commander of the Eastern Theater Command in February 2016. He is a member of the ETC Party Committee. Gu Xiangbing previously served as a deputy commander of the East Sea Fleet (2011-2016), commandant of the Submarine Academy (2009-2011), and deputy chief of staff of the North Sea Fleet (2008-2009). He rose up through the North Sea Fleet submarine community. He was promoted to RADM in July 2010 and VADM in 2017.

LGEN Qin Weijiang (秦卫江 b. 1955) was assigned as commander of the ETC Army in 2016. He is dual-hatted as an ETC deputy commander.  He previously served as deputy commander of the NJMR (2010-2016), commanded the former 27th Group Army (2006-2010), served as deputy chief of staff of the Beijing Military Region (BJMR, 2005-2006), deputy commander of the 65th Group Army, and commanded the Shanxi Military District. Qin Weijiang was promoted to MGEN in 2000 and LGEN in 2012. He is reportedly the first military commander to be awarded a master’s degree in military science from the National Defense University (2002). His brother, MGEN Qin Tian (秦天), is reportedly the current chief of staff of the People’s Armed Police. Qin Weijiang also serves as a member of the Standing Committee of the Chinese People’s Political Consultative Conference (CPPCC) and its Hong Kong, Macao and Taiwan Overseas Chinese Committee. He is reportedly the son of former Minister of Defense Qin Jiwei (秦基伟; 1914-1997).

VADM Wei Gang (魏钢 b. 1960) was assigned as the commander of the Eastern Theater Navy (East Sea Fleet) in January 2017. He previously served as deputy commander and chief of staff of the Southern Theater Command Navy (2016), director of the PLA Navy Logistics Department (2015), deputy commander of the North Sea Fleet (2015), and deputy director of the PLA Navy Equipment Department. He was promoted to VADM in 2018 and is an alternate member of the 19th Central Committee.

MGEN Liu Qingsong (刘青松 b. 1963) was assigned as the political commissar of the ETC Navy (East Sea Fleet) in July 2018. He previously served as the deputy director of the PLAAF Political Work Department (2017-2018), and deputy director of the GZMR Air Force Political Department. Liu Qingsong is at least the second PLAAF officer assigned to a PLA Navy theater command leader grade position. He was promoted to MGEN in 2014.

LGEN Liu Dewei (刘德伟 b. 1959) was assigned as the political commissar of the ETC Air Force in February 2016. He is dual-hatted as an ETC deputy political commissar. He previously served as the NJMRAF political commissar (07/2015-01/2016) and deputy director of the PLAAF Political Department (2013-2015). He was promoted to MGEN in 2010 and LGEN in 2016). He serves as a member of the Central Commission for Discipline Inspection.

Rachael Burton is the Deputy Director at the Project 2049 Institute where she manages the Institute’s research and program development. She currently studies the Chinese Communist Party’s foreign policy, U.S.-Taiwan relations, and U.S. policy towards Burma (Myanmar).

Mark Stokes is the Executive Director at the Project 2049 Institute.