The Hazards of Taiwan: Integrating Traditional and Non-Traditional Security 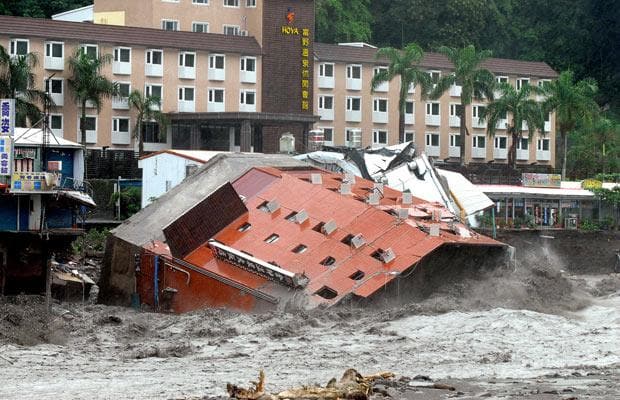 (The Hotel Chin shuai collapsed during the typhoon Morakot in Chihpen, in southeastern Taiwan. Source: AFP.)

A visit to Taiwan every couple of months is needed to remind oneself of a world that exists outside the ordinary comforts of northern Virginia.  The beauty and rich complexity of Taiwan can be mesmerizing. Yet a major typhoon that lingered off the southern coast of Taiwan, a 6.3 magnitude earthquake, and an extravagant Chinese military parade earlier this month are stark reminders of the diverse range of threats that the island’s population faces. Not for the weak of heart, Taiwan is the most dangerous place on earth. Here’s a condensed review of the threats to lives, property at the local level, and overall economic and political stability that Taiwan’s democratically-elected government must manage.

A 2005 World Bank report assessed that “Taiwan may be the place on Earth most vulnerable to natural hazards, with 73 percent of its land and population exposed to three or more hazards.” Trends indicate the threat from natural disasters may be getting worse. Perhaps a direct result of global climate change, insurance claims due to natural disasters have experienced a dramatic rise over the past several years.

The military and natural disaster threats are serious. However, most threatening may be pandemics. Widespread urbanization, high population density, proximity and travel to and from the historical source of most of the world’s most severe pandemics (China) indicate that a pandemic may be Taiwan’s most severe threat.  A key reason for the high risk of pandemic in Taiwan is its population density, which is the second highest in the world among countries with a population of more than 10 million.  One study indicated that if an influenza outbreak similar in scale to that of 1918, casualties could reach 315,000.

Taiwan often is viewed as immune to terrorism, perhaps due to the island’s isolation within the international community. Yet the unexpected often happens. Taiwan’s role as a hidden center of the global economy and the open nature of its society could someday lead to the unthinkable. The island’s ports have been viewed as a potential transshipment point for weapons of mass destruction. Taiwan has been a active participant in U.S.-led global counter-proliferation initiatives, such as the Megaports Project.

Use of Military Force

Taiwan faces the most daunting military challenge in the world. As highlighted in the March 2009 Department of Defense Report to Congress on Military Power of the People’s Republic of China (PRC), “China’s armed forces are rapidly developing coercive capabilities…[that] could in the future be used to pressure Taiwan toward a settlement of the cross-Strait dispute on Beijing’s terms while simultaneously attempting to deter, delay, or deny any possible U.S. support for the island in case of conflict.”  Complicating matters is the uncertainty in Taipei about the U.S. security commitment to Taiwan and America’s role as security guarantor in East Asia.

Summing It Up: The Evolving All-Hazards Approach

To make matters worse, the Republic of China (Taiwan), despite its meeting almost every legal criteria for sovereignty, does not enjoy diplomatic recognition from most of the international community. Despite its nascent democracy, Taiwan’s international diplomatic status often falls below thug states like North Korea, and international entities like the Palestinian Liberation Organization and the Vatican.

In light of the range and severity of threats and its diplomatically-challenged international status, Taiwan has done fairly well over the last 10 years in coping with its diverse security challenges. A visit in early October to Taiwan’s activated Central Emergency Operations Center during the most recent typhoon demonstrated a professionalism and competency that was refreshing, and put the extremely unfortunate bureaucratic snafu that delayed central government response to Typhoon Morakot in August 2009 in a different light. As in war, Clausewitzian friction stems from imperfect situational awareness, which in turn results in imperfect responses.  Friction is the unexpected. It is also Murphy’s Law — if it can go wrong, it will.

Rarely if ever is there an emergency – manmade or otherwise – in which human frailties and imperfections aren’t exposed.  However, improvement comes from learning.  Because it has much more experience than we do, there’s a lot the United States could learn from Taiwan’s evolving “all-hazards” approach to emergency management.