Aerospace Trends in the Asia-Pacific Region

The Arctic “Floating Pipeline” to Asia? 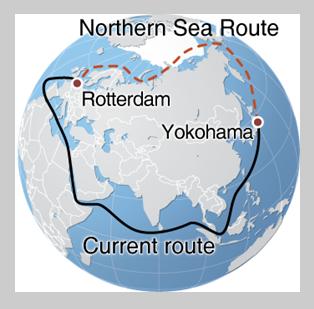 The Arctic Northern Sea Route (NSR) looks set for another summer of experimental navigation as ice cover temporarily recedes in this shipping frontier. Russia’s largest government owned shipping company Sovcomflot is planning the first over oil tanker shipments from the country’s resource-rich northwestern region to Japan and China through the NSR.

The deliveries will herald a new dimension in the region’s energy dynamics. As countries in Asia seek to diversify beyond Middle Eastern oil, Russia’s ambition of capturing a larger share of the region’s energy market could be furthered by the increasing accessibility of the NSR. The route has been hailed as a “floating pipeline” connecting Russia to a lucrative, import dependent Asian energy market, extending all the way to Southeast Asia. In addition to oil, there are similar plans for future shipments of liquefied natural gas through the NSR which could reduce transport to the Asia-Pacific market by 30%.

Climate change induced warming of atmospheric and oceanic temperatures is likely to open the NSR to longer periods of shipping. The sea route, currently only traversable for two months during the summer with specialized vessels, is highly anticipated as a shortcut between East Asia and Europe, bypassing the traditional passage through the treacherous Strait of Malacca and the pirate-plagued Gulf of Aden. If the Russian oil tankers successfully complete the voyage this summer, it will also open up the new possibilities for the maritime trade of Arctic resources through the NSR.

A northern shipping lane could facilitate Asia’s access to Russia’s Arctic wealth. The remote Yamalos-Nenets Autonomous area, where the upcoming shipments to Japan will originate, accounts for 90% of Russia’s natural gas and 12% of its oil outputs. Estimated reserves are staggering and include some of the largest untouched oil fields in the country. Warming global temperatures also raises possibilities for viable drilling in currently inaccessible Arctic areas.

To boost future Arctic energy trade, from the modest 3 million ton deal between Lukoil and Sinopec to a commercially significant level, intermediate investments are necessary for enhancing NSR’s shipping potential. A larger fleet of ice-class tankers and escort vessels can increase the volume of trade as production rises. Search-and-rescue facilities as well as other supporting infrastructure along the passage can improve the NSR’s safety and utility, potentially reducing shipping insurance costs and negative environmental impacts.

For Asian countries with keen interests in the Arctic, but without territorial claims to the resources, the NSR opens up the shipping potential to tap into the energy-rich region. In addition to shortening the maritime transit between East Asia and Europe, the NSR offers a strategic trade lane to Asia for Arctic commodities.