The Rise of China’s Eco-cities: A Harbinger of a Sustainable Future?

Taiwan, the People’s Liberation Army, and the Struggle with Nature 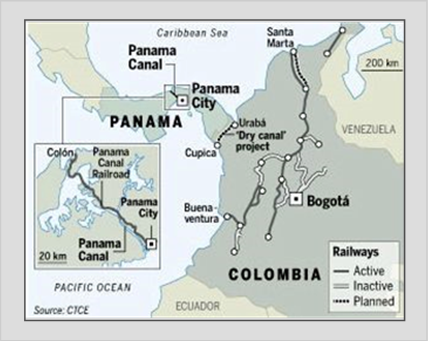 With its long history of civil war, drugs, and armed guerrilla groups, Colombia has never been an investor’s paradise. Other than the United States, most other countries have stayed out—until now. China recently announced an ambitious plan to construct a 136-mile railroad connecting Colombia’s Atlantic and Pacific coasts. Financed by the Chinese Development Bank and operated by the state-owned China Railway Group, this $7.6 billion venture has a projected capacity of moving 40 million tons of cargo each year. Yet, this ‘dry canal’ is unlikely to supplant the traditional Panama Canal shipping lane—current conduit of 5% of global trade—as railway containers are a less effective and more costly method of transporting goods and resources.

This staggering investment in the infrastructure of the world’s fifth largest coal exporter goes beyond satiating China’s hunger for energy resources. Chinese ambassador to Colombia, Gao Zhengyue, pointed to Colombia’s “strategic position…as a port to the rest of Latin America.” Beijing’s efforts to upgrade relations with Bogota include an agreement to increase legislative cooperation and pursuing aspirations of making Colombia an unconditional friend and political ally.

For its part, Colombia is not objecting to Chinese advances. In fact, it regards Chinese investment as significant for bolstering its infrastructure and increasing its economic standing in Latin America. Oscar Zuluaga, Colombia’s finance minister, attributes the country’s low level of integration with Asia for its inability to keep pace with its neighbors’ high rate of economic growth. Although China is currently Colombia’s second largest trading partner after the United States—with bilateral trade skyrocketing from $10 million in 1980 to $5 billion in 2010—economic ties still lags behind China’s relations with other Latin American countries. Bogota’s recent appointment of Carlos Urrea, a successful textiles entrepreneur, as ambassador to Beijing signals a desire to more vigorously pursue closer ties with the Asian giant.

From a political standpoint, a Sino-Colombian partnership seems ideologically incongruous. Colombia, a stalwart of democracy in the region, has spent nearly fifty years fighting against the FARC (Fuerzas Armadas Revolucionarias de Colombia), a Socialist armed rebel group. Integral to its defense and counterinsurgency efforts has been U.S. support. Colombia has historically been one of, if not the, strongest U.S. allies in Latin America. Despite its steadfast loyalty, politically and economically, to the U.S., the long delay in ratifying the 2006 bilateral FTA may have contributed to Colombia’s interest in diversifying its trade relations, perhaps even with the implicit goal of pressuring the U.S. for more movement on the FTA deal. While Colombian president Santos has dismissed any adverse effects that a closer relationship with China will have on Colombia-US relations, the question lingers: can one be unconditional friends of both the United States and China?