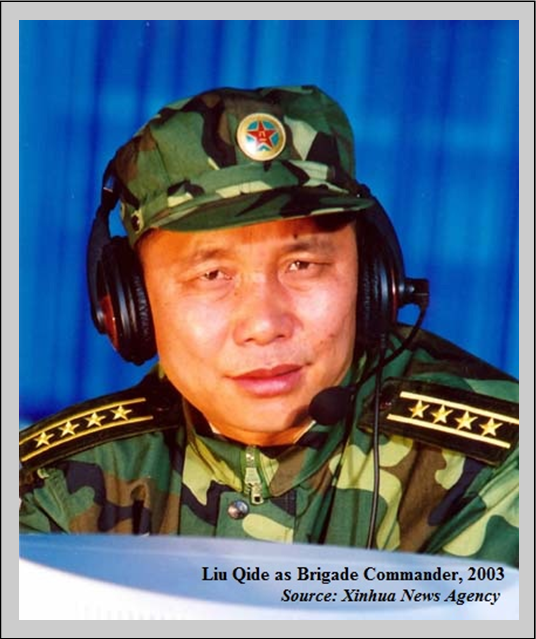 A Chinese government-affiliated publication has identified Major General Liu Qide [劉啟德] (b. 1957) as the newly assigned commander of 55 Base (96301 Unit), China’s premier intercontinental ballistic missile (ICBM) command headquartered in the western Hunan city of Huaihua. Liu replaced Major General Lu Fu’en, who was promoted to Second Artillery chief of staff in December 2010. Lu—in turn—replaced Lieutenant General Wei Fenghe (b. 1954), [1] who was assigned as People’s Liberation Army (PLA) deputy chief of the General Staff Department (GSD). Wei’s move to a senior position within the GSD reflects the Second Artillery’s growing prominence within the Chinese defense establishment. Furthermore, these personnel shifts suggest the significant role of the 55 Base in the Second Artillery’s organizational structure and the importance that the Chinese leadership attaches to the ICBM units’ function in its overall missile defense strategy. [2]

A Profile of Liu Qide

Given his relative youth, Major General Liu Qide appears to have a bright future. Born in Shandong’s Jining County in February 1957, Liu Qide has roots in the Second Artillery’s ICBM community. He was assigned to 55 Base’s 803 Brigade in Jingzhou as a junior officer, and remained in the unit for more than a decade (see Chart I below). Liu Qide was a junior member of the DF-5 operational test and evaluation unit within the brigade, and participated in test launches in the early 1980s. [3] Liu served as 803 Brigade Commander from 1997, and was subsequently assigned as director of the 55 Base Equipment Department in 2004. In this position, he oversaw the integration of the DH-10 land attack cruise missile (LACM) and new ICBM variants into the base’s missile inventory. He transferred to the Second Artillery’s Communications Department in July 2007, where he managed the force’s nuclear command, control, and communication system. He returned to Huaihua in early or mid-2010 to serve as 55 Base chief of staff until his promotion to commander.

The Central Military Commission (CMC) directed the initiation of launch site preparations in Hunan in August 1966, and 55 Base was formally established on 25 May 1968. An engineering unit (306 Engineering Command) that had returned to its home base of Guangxi Province after service in Vietnam was responsible for infrastructure development. Deployed to the remote southwestern Hunan town of Jingzhou, the command moved to Huaihua in 1970. The first 55 Base commander and political commissar were Mo Yiming and Deng Bo, respectively. Mo and Deng remained in their positions for over a decade. Initial DF-4 and DF-5 missiles entered service with two operational test and evaluation units in the first half of the 1980s.

As 55 Base commander, Major General Liu Qide and his staff oversee three brigades equipped with the DF-4 and DF-5 ICBM systems, and a fourth equipped with the 2,000 kilometers (km) range DH-10 LACM. [4] With an estimated range of at least 13,000 km, the silo-based, liquid-fueled DF-5 (NATO designation of CSS-4) is capable of striking targets throughout most of the continental United States. The DF-4 (NATO designation: CSS-3), with a range of at least 5,500 km, is capable of reaching targets throughout the Asia-Pacific region, including U.S. facilities on Guam.

Chart I: Organizational Structure of 55 Base

In addition to its four missile brigades, 55 Base oversees five support regiments. A regiment in Dongkou trains new recruits assigned to 55 Base units. Another regiment, headquartered in Huaihua’s eastern suburbs, manages the storage of nuclear warhead components and missiles. A special mobility regiment, most likely headquartered in the vicinity of the warhead depot, transports warhead components and/or missile assemblies from underground storage facilities to launch positions. The regiment also likely supports the 824 Brigade’s LACM cross-regional mobility mission. Another regiment ensures readiness of launch vehicles and other mobility systems. A final regiment manages base communications systems.

Base 55’s sister ICBM command base is 54 Base, headquartered in Luoyang, Henan Province. Also established in 1968, Western sources claim 54 Base oversees a DF-5 brigade and a DF-4 brigade, as well as one probable DF-31 brigade at Nanyang in southwest Henan Province. All three are concentrated in Henan Province. The commanders of 51 Base (Shenyang), 52 Base (Huangshan), 55 Base (Huaihua), and 56 Base (Lanzhou) (Note: Base 56 Headquarters have moved from Xining, Qinghai Province to Yuzhong County, Gansu Province, which is approximately 30 km southeast of Lanzhou City.) have the equivalent grade of a group army commander, with 53 Base (Kunming), 54 Base (Luoyang), and 22 Base (Baoji) carrying the equivalent grade of deputy group army commander. Unlike Navy and Air Force regional commands, Second Artillery bases are delinked from PLA military regions and report directly to Second Artillery headquarters in Beijing.

The CMC exercises strict command and control authority over release of nuclear weapons, with the Second Artillery’s central nuclear warhead base in the Qinling Mountains (22 Base) playing a key role in the command and control system. Base 55 likely has control only over few if any warheads during peacetime. In the past, China has relied upon a minimal deterrence nuclear strategy, which requires a small number of warheads and delivery vehicles for counterstrikes against a limited number of enemy targets. Yet, given the expansion of the Second Artillery’s infrastructure, fielding of increasingly sophisticated delivery vehicles, development of missile early warning systems, investment into missile defenses, and Gao’s likely promotion as Second Artillery deputy chief of staff, China’s nuclear doctrine may be transforming in tandem with its growing capabilities. [5]

Mark Stokes is the executive director and L.C. Russell Hsiao is a senior research fellow at The Project 2049 Institute.