Leadership Transitions in the Second Artillery Force at the 18th Party Congress: Implications for Roles and Missions 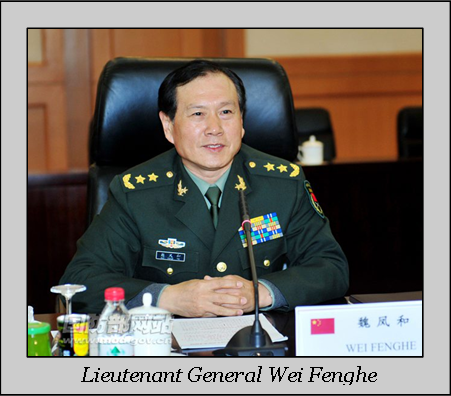 Since its formation, the Second Artillery’s central responsibility has been nuclear deterrence. Yet, as the strategic environment changed, Second Artillery’s mission has gradually expanded to become the CCP and CMC’s principal instrument for achieving strategic effects through direct targeting of enemy centers of gravity.  The process may be seen as a gradual effort to streamline Second Artillery missions into future military operations. Operational firepower is distributed among six corps-level missile bases, a centralized base for storage and handling of nuclear warheads, and operational support brigades/regiments reporting directly to Second Artillery headquarters in Beijing.

Anticipated Changes at the Top

At the most senior level, Second Artillery Commander and CMC member General Jing Zhiyuan (靖志远; b. 1944) is expected to retire later this year.  Jing Zhiyuan rose through the ranks of Second Artillery’s 52 Base, the corps-level missile command operating in southeastern China, then had assignments with 53 Base in Kunming and 56 Base in Xining.  He served as 52 Base Commander during the 1995-1996 missile tests off the coast of Taiwan.  His assignment as CMC member in 2004 reflects the Second Artillery’s growing prominence in resource allocation debates at the most senior levels of the party.  His replacement remains uncertain.  One possible candidate is Lieutenant General (LTG) Wei Fenghe (魏凤和; b. 1954), who currently serves as PLA General Staff Department (GSD) Deputy Chief of General Staff.  LTG Wei’s tenure in a Military Region-grade position, and likely promotion to full general this summer, could qualify him for CMC membership upon assignment as Second Artillery Commander (China Leadership Monitor, June 28, 2010; China Brief, July 22, 2010).

Born in Shandong’s Liaocheng City, Wei was involved in intercontinental ballistic missile (ICBM) missile testing in 1989.  He served as 801 Brigade (Lingbao, 96261 Unit) Chief of Staff and then brigade commander in 1994 at the age of 40 years old.  In 2000, he served as Chief of Staff of 54 Base in Luoyang, and subsequently commanded 53 Base in Kunming the following year.  Promoted to major general in July 2003, Wei Fenghe was assigned to Beijing as Second Artillery Deputy Chief of Staff.  Between 2006 and 2010, Wei Fenghe served as Second Artillery Chief of Staff, the most senior strategic targeting position within the CCP, CMC, and PLA (Bbs.tiexue.net, April 22, 2010).  He was promoted to LTG rank in 2008.

Second Artillery Political Commissar General Zhang Haiyang (张海阳; b. 1949) may continue in his current position.  Given his non-traditional Second Artillery background and princeling status, Zhang also is a candidate for promotion to Director, General Political Department (GPD).  As a side note, current GPD Director, General Li Jinai, spent his first 20 years in the Second Artillery.  Involved in the initial establishment of 52 Base in the mid-1960s, Li Jinai worked his way up the chain to become Deputy Political Commissar of 54 Base, an ICBM corps headquartered in Luoyang, before his GPD assignments.

Among all PLA service branches, the Second Artillery best understands the art of nodal analysis, strategic targeting, and effects-based operations, which is traditionally under the purview of the air force. [4] However, the PLA Air Force appears to be still in the early stages of transforming from a defense counter-air mission toward an offensive interdiction orientation. 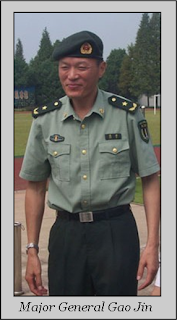 Born in Jiangsu Province, MG Gao represents a new generation of Second Artillery leadership.  A 1985 graduate of the Second Artillery Command Academy, then Lieutenant Colonel Gao Jin led the operational test and training “seed” group that began introduction of the PLA’s first conventional ballistic missiles into the active force in 1991.  The 815 Brigade, China’s first conventional SRBM unit, was based in the Jiangxi City of Leping and may have recently moved to northeast suburbs of Shangrao City.  As 815 Brigade Chief of Staff, Colonel Gao Jin executed missile exercises off the northern and southern shores of Taiwan in July 1995 and March 1996.  Gao Jin rose to command 52 Base, where he served until summer 2011. After a short stint as Second Artillery Deputy Chief of Staff, Gao Jin replaced LTG Lu Fu’en (陆福恩; b. 1954) as Second Artillery Chief of Staff in December 2011.  LTG Lu, along with LTG Wang Jiurong (王久荣; b. 1951) and Wu Guohua, is now one of three Deputy Commanders. 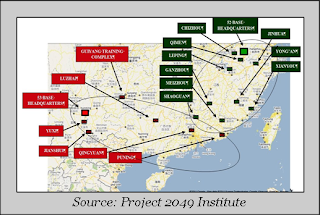 The senior figure overseeing the probable introduction of the DF-21 anti-ship ballistic missile (ASBM) variant into the active force, Major General Zhou Yaning [周亚宁], has assumed command of 52 Base.  Replacing Gao Jin in July 2011, MG Zhou had commanded 53 Base since 2009.  Zhou served as brigade commander of the 817 Brigade in Yong’an (Fujian Province) and then 52 Base Equipment Department Director.  As 53 Base Commander, Zhou had replaced MG Gao Xiuren, who previously served as 52 Base Chief of Staff.

While military strategies and advanced platforms are important indicators of future capabilities, personnel is equally if not more important in the overall context of understanding China’s military development. After all, an army is only as smart and strong as its generals and soldiers. As the CCP and PLA make their transitions during the 18th Party Congress this fall, the China-watching community should invest more efforts to understand the backgrounds and proclivities of leaders in Second Artillery.

In light of the growing prominence of Second Artillery in Chinese military operations, a deeper understanding of the roles and future direction of this operationally significant service may be warranted. At the same time, leaders within high-placed grades of each service are important indicators of future rank and seniority within the military hierarchy – and there is logic pattern to why someone with their particular experience and qualifications are where they are. Given the apparent emphasis being placed on cyber operations by the top leadership, one single organization within the PLA likely is charged with planning for and conducting deliberate cyber attack against computer networks upon which opposing national command authorities and supporting critical infrastructure rely.  If supported by GSD intelligence, integration of nuclear, conventional strike, and strategic cyber warfare planning, programming, and budgeting within a single Second Artillery headquarters staff department would be significant. At the very least, the promotion patterns of Second Artillery leaders may be seen as reflection upon the CCP and CMC priorities for the force as the PLA continues to move to more jointness and modernize its military capabilities under a new strategic environment.

Mark Stokes is the Executive Director of the Project 2049 Institute. L.C. Russell Hsiao is a senior research fellow at the institute.

1.    There is no explicit and authoritative source linking the Second Artillery with a CNA mission.  A CNO mission could be as simple as formation of a regiment for information security and exploiting, or attacking an enemy’s nuclear command and control network.  Candidate units likely report directly to Second Artillery Headquarters Department, such as the Technical Reconnaissance Group headquartered in the Beijing suburb of Huilongguan or Network Security Group in Qinghe.
2.    Yu, Jixun, ed.  2004.  Second Artillery Campaign Science. Beijing: PLA Press, 142.
3.    The GSD Fourth Department’s core competency is operational-level electronic countermeasures, although the department’s leadership may have lobbied for the strategic CNA mission several years ago.
4.    Deptula, David. 2001. Effects-Based Operations: Changes in the Nature of Warfare. Virginia: Aerospace Education Foundation. http://www.afa.org/mitchell/reports/0901ebo.pdf.