Leadership Transitions in the Second Artillery Force at the 18th Party Congress: Implications for Roles and Missions

The Arctic and Natural Gas in Northeast Asia’s Energy Future 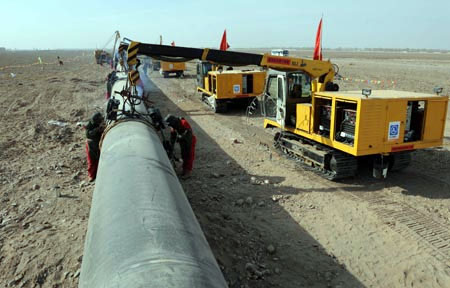 On June 19, 2012 India’s Oil and Natural Gas Corp. (ONGC) and the China National Petroleum Corp. (CNPC) signed a Memorandum of Understanding. The MoU is intended to strengthen existing Exploration and Production (E&P) operations in Burma, Sudan, and Syria, and look ahead to making joint bids on foreign oil and gas fields for E&P in the future. This is the most recent development in a trend of cooperation between India and China that has slowly emerged over the past few years. In 2006, the two companies signed an initial pact for bilateral oil cooperation and possible joint crude purchases, which has enabled the ongoing joint E&P development in Burma, Syria, and Sudan. Yet, these agreements have not resulted in joint bidding or policy cooperation. The recent MoU will enable ONGC and CNCP to expand cooperation to jointly bidding on fields and jointly investing in infrastructure development. The pipeline across Burma from the Bay of Bengal to Southwest China is the first of such downstream projects and may demonstrate the maturation of Sino-Indian energy relations.

The reality of growing economic interdependence is contrary to the protectionist impulse that runs strong in both countries. Both countries strive to be energy independent, but in an increasingly interconnected and globalized world, neither India nor China has the financial or political capital to unilaterally and effectively develop energy resources across all energy markets. As one ONGC Videsh Ltd. (OVL) managing director D.K. Saraff said referring to the recent MoU, “we should collaborate and bid together; there is no point in raising prices.” Saraff was undoubtedly referencing the above market prices at which Chinese energy companies have secured rights to developing oil fields in the past. With the signing of the MoU, more safeguards will be adopted to ensure that bidding will not get out of hand, and prices will stay reasonable.

The proposed ONGC and CNPC partnership will ease exploration and development costs by enabling both countries to jointly participate in developing new energy resources. As two of the biggest economies in Asia and largest energy importers, energy access and development are primary and mutual concerns for India and China. Competition and high energy prices stem from the recognition on the part of both governments that energy availability will be a critical limiting factor for the growth of both economies, as energy access and availability is vital to economic growth.

Investments in energy development are not confined to E&P processes but also the ability to transport energy produced or purchased. According to the 2006 UN Economic and Social Commission for Asia (UNESCAP) study of energy infrastructure in Asia, most countries in the region were still in the process of developing their energy infrastructure, which in turn demands a higher percentage of GDP to be spent on production and transport. The survey proposed a “trans-Asian energy system” that would promote linkages towards greater system energy integration, which would bring about energy security and impose less risk on individual firms and countries. The pipeline through Burma could be the start to further productive energy integration in Asia. To be sure, limited energy resources in China and India have led to an intense regional competition for oil and gas fields, and the lack of government coordination has driven energy prices up and excluded countries with fewer financial resources from the market.

The pipeline through Burma, due to be completed in May 2013, is an integral part of China’s plan to diversify energy trade routes and will significantly shore up China’s energy security. As pipelines are built, developed, and used across borders, the risks and rewards are shared among all countries involved. Moreover, as more developed countries work with less developed ones, the private sector has had opportunities to partner with governments and local communities to develop alternative energy solutions.  Currently an overwhelming percent of China’s crude comes through the Strait of Malacca (one recent study put it at eighty-five percent) and the geopolitics of the area make it complicated and politically expensive for China to adequately secure imports. Energy corridors through Southeast Asia, such as the pipeline through Burma, are an important conduit for Chinese energy security and the diversification of China’s energy trade routes; the pipeline through Burma is the first of such investments.

Energy cooperation between India and China appears to be increasing; the signing of this MoU points to a maturing energy relationship between New Delhi and Beijing. This agreement may also set a precedent and provide a foundation for greater regional integration of the Asian energy market, which will be essential for stabilizing conflicts rooted in energy security concerns. However, the process of regional integration is far from complete and political tension is still present in the bilateral Sino-Indian relationship. While this agreement is an important step toward an alignment of energy policies, more political restraints and capital are needed so that the competition for energy, so crucial to economic growth, does not become a zero-sum game. The foundation for wider cooperation may have been laid and perhaps provides a model for further cooperation in other sectors of the economy, but the extent to which current state affairs will impede potential progress still remains to be seen. As both companies are state-owned, they have a closer relationship to their states than private companies would and coordination might be more feasible in that aspect. However in order for strategic cooperation to take place on a meaningful level, foreign policy in both countries needs to change and the differences in the economic and political interests of China and India need to be reconciled.