Modi’s Visit to Tokyo: A Snapshot of Japan-India Relations

China’s Economic Leverage in Hong Kong a Warning for Taiwan 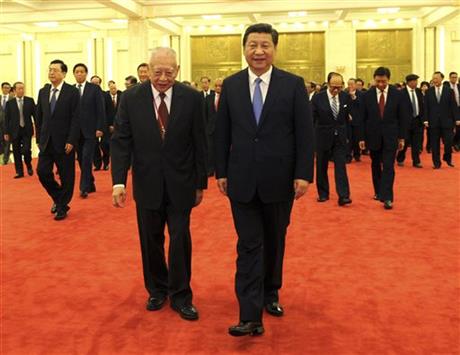 China’s position that Taiwan’s economic future lies with the Mainland is crystal clear, and has been a consistent message throughout recent years. In the run-up to Taiwan’s 2012 presidential election, Beijing leveraged a minority of Taiwanese pro-unification groups and think tank scholars to supplement its own assertion that Ma Ying-jeou’s plan for a “Golden Decade” was inseparable from the Mainland’s development, and specifically in line with the economic measures of Beijing’s 12th Five-Year Plan. This year on the sidelines of the Boao Forum for Asia (BFA) Annual Conference, Chinese Premier Li Keqiang publically called on Taiwan to take full advantage of China’s economic growth, and offered Taipei first privileges to the Mainland’s development opportunities. Likewise, President Xi Jinping has stated that cross-strait economic integration will bring about mutually beneficial win-win results that should not be impeded.

Both Ma Ying-jeou and top Mainland officials have reiterated their support for an “economics first, politics later” approach to cross-strait relations, but the difference in perception of what the ultimate end-goal is makes economic integration a dangerous game for Taipei. Top Chinese Communist Party (CPP) leaders have cited the Economic Cooperation Framework Agreement (ECFA) as one of many ways to develop cross-strait relations with peaceful reunification as the target objective. Such integration is viewed by Mainland Chinese in terms of laying a larger foundation for the step-by-step process towards achieving China’s reunification. At the CCP 18th Party Congress in November 2012, Hu Jintao stated that under the one country two systems rubric, both sides of the strait should deepen economic cooperation to increase common interests.

However, this may prove to be a problem for Taiwan if Beijing tries to leverage these common interests to achieve its own political ends which Taipei does not share. Taiwan’s leaders undoubtedly understand this danger, but they see a lack of alternative options for fear of being left out of Asia’s economic integration. This has created a convenient lever for Beijing, as Chinese leaders try to make Taiwan’s regional economic integration contingent upon furthering the cross-strait economic merger.  Even so, it is obvious that by playing along Taipei has secured some dividends. President Ma correctly notes that after signing ECFA, sudden progress was made in other bilateral trade deals with Singapore, New Zealand, Japan, and the European Union.

Despite these breakthroughs, Taipei must fully prepare for how Beijing may use the growing cross-strait economic lever to pressure Taiwan into political concessions. Taiwanese scholars have pointed to how CCP leaders are using economic ties to garner influence in Hong Kong, drawing cogent parallels between the 2003 Mainland-Hong Kong Closer Economic Partnership Arrangement (CEPA) and the more recent cross-strait service trade agreement. CEPA allowed the Mainland to become Hong Kong’s largest trading partner. As economic dependency on the Mainland grew, Beijing fostered considerable informal control through contacts with business leaders in the special administrative region. The CCP has long called for “using business people to pressure politicians.” Notably, Hong Kong business tycoons were rewarded with membership and honorary titles in the CCP’s comprehensive united front entity, the Chinese People’s Political Consultative Conference (CPPCC). Now as foreign governments and the United Nations Human Rights Committee voice their support for Hong Kong protesters’ demand for free elections, many of the city’s own business magnets with vested interests have publically opposed the movement as disruptive to the territory’s prosperity following a closed-door meeting with Xi Jinping in Beijing. Given the CCP’s consistent use of united front tactics such as “aligning friendly forces” in the push for national reunification, it is only logical to assume that when Beijing feels its economic leverage is sufficient, Chinese leaders may increasingly call upon Taiwan’s business moguls to parrot its cause.

Hong Kong’s example demonstrates that Taipei must guard against China’s strategy of utilizing cross-strait economic manipulation to achieve political goals. In order to protect itself, Taipei must ramp up a considerable economic reform agenda that includes aggressively pursuing regional free trade agreements. In addition to helping diversify Taiwan’s economic partners, the Trans-Pacific Partnership (TPP) would be instrumental in driving domestic economic reform and have a positive impact on productivity and competitiveness. Taipei should also recognize growing evidence that China’s economy may be headed for future troubles similar to Japan’s financial crisis in the 1990s, making diversification all the more important. As the Mainland’s neighbors become disillusioned with Beijing’s coercive foreign policy and seek to minimize their own economic dependence on China, new opportunities may take shape for Taiwan with other Asian states. Taiwan should seek to capitalize on these favorable circumstances, and build new lucrative relations independent from cross-strait integration.