Reaching the Limits: China as a Responsible Stakeholder

The Role of Traditional Chinese Culture in CCP Policy 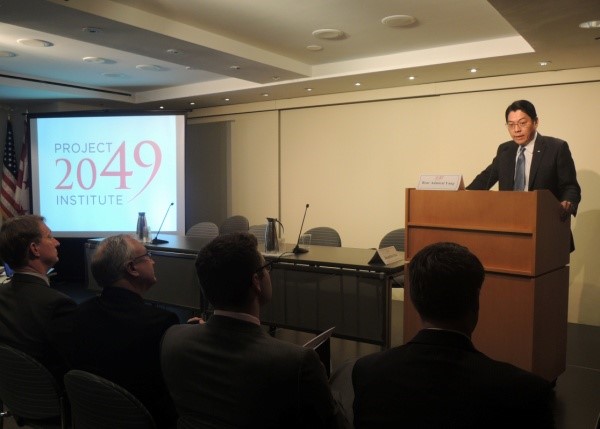 By Julia Bowie and Baldwin Mei |

The People’s Republic of China (PRC) has embarked upon a military modernization program that is prompting increasing naval buildups in the Asia-Pacific region. Submarines are of particular interest. Like other defense establishments in the region, the Republic of China’s (ROC, referred to as Taiwan) Navy has a long standing, legitimate requirement for a fleet of diesel electric submarines that could provide a credible and survivable deterrent against the Chinese People’s Liberation Army (PLA). Thus strengthening Taiwan’s strategic position in any potential cross-Strait political negotiations and in the region at large. Though U.S. support for Taiwan’s submarine program has long been a contentious subject, recent developments in Taiwan’s indigenous program could herald in a new wave of cooperation.

On December 1st, 2015, the Project 2049 Institute hosted a conference titled “A Deep Dive: Taiwan’s Future Submarine Program.” One presentation highlighted the complex nature of Taiwan’s submarine program and the reasons why an agreement between the U.S. and Taiwan has failed to move forward. In addition, a panel of experts discussed Taiwan’s submarine program in relation to the PLA’s force modernization and Taiwan’s defense strategy, and identified key policy goals for U.S.-Taiwan relations.

The panelists agreed that a Taiwan submarine program would play a key role in the defense of the island, thereby reducing the effectiveness of the PLA’s coercion tactics. This would have an important strategic effect on regional security.

Given Taiwan’s important role in regional security dynamics and strategic positioning in the first island Chain, any use of force against Taiwan would alarm other countries and thus destabilize the Asia-Pacific. A Taiwan submarine program would support regional peace and stability by providing Taiwan with a credible deterrent, and help to achieve a more stable cross-Strait balance.

With regards to U.S. support, the experts agreed that the U.S. has a role to play in Taiwan’s submarine program and that the U.S. should work to support the design and building of submarines in Taiwan. There are many ways the U.S. can become involved in a “low key” fashion– through technical assistance, engineering, and technology transfer. As a first step, the U.S. government should license the domestic defense industry to contribute to the submarine program through program management, technical assistance, and direct commercial sales of submarine systems and components.

Taiwan’s Ministry of National Defense (MND) has identified submarines as a priority for territorial defense, and has sought to acquire a fleet of 8-12 diesel electric submarines since 1969. Under the Taiwan Relations Act (TRA) of 1979, the U.S. is committed to provide Taiwan with necessary defense articles and services. Based upon the initial findings of two U.S. assessment teams sent to Taiwan to evaluate its naval modernization requirements, the Bush administration agreed to assist Taiwan in its acquisition of submarines in 2001. However, complications have hampered the program until today, prompting Taiwan to invest and build its indigenous submarine program.

The ROC Navy currently possesses four submarines, however two out of four of those vessels are outdated and cannot meet the requirements of modern warfare. Though recent life extension programs (LEP) were awarded in April 2016, the LEP’s do not address operational requirements nor does it account for future combat environmental factors. Given the fact that most other regional maritime powers have expanded their submarine fleets, a new Taiwan submarine program is necessary to ensure Taiwan’s undersea warfare capabilities.

In addition to aiding Taiwan’s defense capabilities, the submarine program would also have an impact on Taiwan’s long-term peacetime competition with the PRC. Competitive strategies seek to induce a country’s competitor to devote more resources to capabilities that the country views as unthreatening. A new Taiwan submarine program may stoke longstanding PRC fears of an island chain blockade, inducing China to devote greater resources to anti-submarine warfare (ASW). This may be beneficial, as strong ASW capability is difficult and expensive to develop, and is an area of long-running PLA organizational and technological weakness.

Over the years, complications on both sides have delayed progress for the U.S. and Taiwan to cooperate on the submarine program

• Political considerations and U.S.-China relations: Even though the submarine programs of many other countries are considered defensive, in the past, the U.S. avoided selling submarines to Taiwan or cooperating with Taiwan on its submarine program because it considered Taiwan’s submarines offensive. Since then, pursuing a stable and constructive relationship with the PRC, which vehemently opposes arms sales and defense cooperation between the U.S. and Taiwan, has affected U.S. commitment to Taiwan. Increased prioritization of the U.S.-China relationship limits the flexibility with which the U.S. can cooperate with Taiwan.

• Domestic debates on Taiwan: Initially there was debate on Taiwan about whether to pursue a submarine sale through foreign military sales (FMS) channels or defense commercial sales (DCS). An FMS requires the U.S. Department of Defense (DOD)to work through the American Institute in Taiwan (AIT) to contract with U.S. defense industrial companies and the Taiwanese defense ministry, whereas, a DCS, requires the two defense departments to work together directly. This debate long stalled progress on the program. Furthermore, there were significant Taiwanese domestic interest groups that wanted Taiwan’s domestic defense industry to undertake construction of the submarines. Eventually, with consensus between KMT and DPP, Taiwan declared an indigenous submarine program in 2014.

• Perceived cost effectiveness (in U.S.): The disparity in defense investments across the Strait has led to the consideration of the opportunity cost of the submarine program within the United States. Since Taiwan’s military expenditure is low, a number of U.S. analysts have suggested that the funds for Taiwan’s submarine program could be best allocated to improving other defense capabilities. Within Taiwan, however, there is no debate about whether or not a submarine program is necessary, but rather how the submarine program should be pursued.

• U.S. operational considerations: The U.S. is concerned about the water space management issues that could arise by having more Taiwanese submarines in the region. However, the U.S. has resolved those concerns with other countries and could do so with Taiwan as well.

In 2016, progress has been made in Taiwan’s submarine program, with a $12.35 million LEP approved for Taiwan’s two Hai Lung (Zwaardvis) class submarines. Designed to keep the units operationally effective for an additional 15 years, the LEP will likely include hull, mechanical and electrical upgrades, updates to the electronic support measures and combat systems, and replacement of legacy technologies with more modern alternatives for sustainability. The contract was awarded to two unnamed European companies, with the Ship and Ocean Industries Research and Development Center also serving a major role in the project. Due to Taiwan’s lack of prior submarine building expertise, it is expected that European or American technical assistance will be brought in to aid the program. This can be seen as a prelude to Taiwan’s indigenous development efforts, providing Taiwan’s R&D personnel to get firsthand experience with key submarine systems before developing their own.

In addition to the LEP, Taiwan has also begun the design process for its own indigenous submarine. Vice Admiral Mei Chia-Shu stated that the design process is expected to be finished by 2019 and the first submarine constructed by 2024, with a total program budget of $3 billion NT ($93.5 million). According to a report received by Kyodo News, the presumptive construction company CSBC Corp Taiwan will need significant foreign assistance during the construction process in key areas such as the turbine, motor, combat, and hull systems. This claim is reinforced by similar comments made by Admiral Pu Tze-Chun and CSBC’s recent establishment of a submarine development center to support the submarine program. However, significant outside political and economic pressure (primarily from the PRC) is stalling the search for potential foreign aid.

Taiwan has a legitimate, long-standing requirement for a modern fleet of diesel electric submarines. With the first stages of the indigenous submarine program underway, experts agree that the time is ripe for the U.S. to provide assistance to this groundbreaking program. Additionally, the TRA requires the U.S. to provide Taiwan with military articles and services based on military judgments alone rather than political considerations. Therefore, the U.S. should not allow Beijing to co-manage how it relates to Taiwan in terms of their defense needs. As such, the U.S. should offer fair considerations to export licenses and technical assistance with regards to Taiwan’s indigenous submarine program and grant the necessary export licenses based on well defined criteria rather than other, intangible factors.

Julia Bowie is a Master’s candidate at the Edmund A. Walsh School of Foreign Service at Georgetown University. Baldwin Mei is a rising senior at Cornell University majoring in physics and minoring in operations research and history. Julia and Baldwin are former interns at the Project 2049 Institute.