The “Going Out” of Innovation: A Look at U.S.-China Technology Partnerships 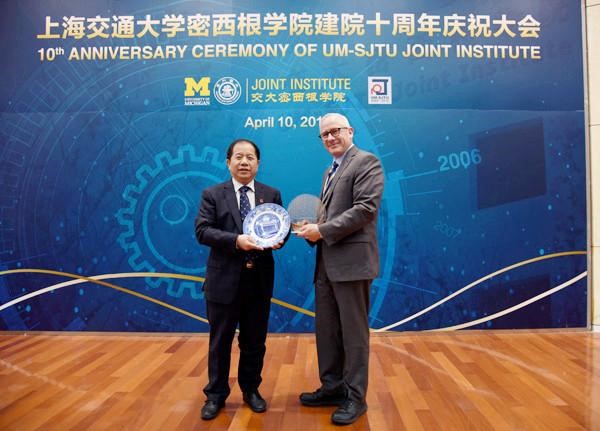 Since the People’s Republic of China (PRC, China) published its Outline of the National Medium- and Long-Term Science and Technology Development Program (2006-2020) (MLP) in 2005, the Chinese government has repeatedly emphasized the need to enhance its manufacturing and technological innovation capabilities. In recent years, the government has published a variety of policy goals and directives on manufacturing and scientific innovation, most notably, Made in China 2025 (中国制造2025). One of the overarching goals of Made in China (MIC) is to ensure that “by 2049, the centennial of the founding of New China, China’s manufacturing sector status will become more consolidated and China will become the leader among the world’s manufacturing powers.”[i] To achieve this, MIC explicitly highlights ten priority sectors for development. These sectors are next-generation information technology (IT), numerical control tools and robotics, aerospace and aviation equipment, maritime engineering equipment and high-tech ships, advanced railway equipment, energy-saving and new-energy vehicles, electrical and power equipment, new materials, medicine and medical equipment, and agricultural machinery.[ii]

The Trump administration views China’s industrial policy, as outlined in MIC, as a threat to the American economy and, by extension, to the United States (U.S.) national security.[iii] A 2017 report by the U.S. Chamber of Commerce warned that “MIC 2025 aims to leverage the power of the state to alter competitive dynamics in global markets in industries core to economic competitiveness,” and that “MIC 2025 risks precipitating market inefficiencies and sparking overcapacity, globally.” For example, the China Railroad Rolling Stock Corporation (CRRC) is a Chinese state-owned enterprise (SOE) that was identified as threatening to the American rail industry in testimony by the U.S. Rail Security Alliance before the U.S. Senate Committee on Banking, Housing, and Urban Affairs at a hearing titled, “CFIUS (Committee on Foreign Investment in the United States) Reform: Examining the Essential Elements.”  The testimony identified a variety of anti-competitive tactics CRRC uses to take over freight industries, as it did in Australia. It questioned whether a reliance on a Chinese SOE could potentially compromise the security and safety of U.S. industrial and military freight shipments and raised concerns about implications for the future of the U.S. economy, infrastructure, and national security. The Chinese Communist Party’s (CCP) endorsement of Chinese entities with unclear state ties investing in, and acquiring technologies with, potential dual-use capabilities is also a U.S. government concern.

The Chinese government pursues a variety of strategies to reach development goals in these fields. As noted in the MLP, meaningful progress “requires the mobilization and participation of all sectors of society,” including academia and private companies. At a 2013 speech to the Chinese Academy of Sciences (CAS), for example, General Secretary Xi Jinping explicitly stated that CAS must “[take] the responsibility, and take the lead in realizing forward-leaping development of science and technology” and emphasized that “having a strong sense of patriotism is the first requirement for people working in science and technology in China.”[iv] Many Chinese universities and research institutes have joint partnerships with American institutions, especially research universities. While some of these partnerships were established before MIC was announced, many now focus on the ten sectors emphasized by Made in China. This case study assesses U.S.-China technology innovation partnerships, with a focus on the University of Michigan (UM, Michigan). It looks at how Michigan benefits from these arrangements, how they might contribute to China’s MIC goals, and how the Trump administration views these joint ventures, especially as trade tensions between the U.S. and the PRC remain high. The future of these sorts of partnerships remains unclear as the Trump administration has released a variety of reports identifying predatory Chinese behavior in science and technology sectors, especially how Beijing has sought to benefit from the American culture of academic openness.

As a leading research university, UM has many partnerships with a variety of international institutions. At least nine of these partnerships are with Chinese universities or have Chinese funding.

The PRC has a number of reasons for wanting to form joint ventures with American universities, especially leading centers of research such as UM. Since the inauguration of the MLP in 2006, Beijing has advocated a strategy known as IDAR (“introducing, digesting, absorbing, and re-innovating”) with regard to foreign IP and technology.[xii]  Joint partnerships such as those with UM provide the Chinese side with an “introduction” to foreign IP that can then be adapted for China’s own purposes. In its discussion of how the PRC attempts to acquire technology and IP, a recent paper from the White House Office of Trade and Manufacturing Policy notes that “methods of information harvesting…include open source collection; placement of non-traditional information collectors at U.S. universities, national laboratories, and other centers of innovation; and talent recruitment of business, finance science, and technology experts; and State-backed, technology-seeking Chinese investment.”[xiii]

Michigan is an attractive partner for Chinese joint ventures because it is ranked in the top ten nationally in almost every type of engineering. The state is also a center of the U.S. auto industry and therefore a desirable partner in automobile innovation. Partnerships with China have also been actively sought and encouraged by the state government under Governor Rick Snyder. In 2016, for example, Governor Snyder signed six memoranda of understanding intended to boost direct investment between Michigan and Guangdong Province, particularly with the city of Shenzhen. The Sokon and BICI collaborations with UM were established as part of these agreements. The Chinese delegates at the signing included Politburo Member, Vice-Premier Hu Chunhua and the current Chinese Ambassador to the U.S., Cui Tiankai. Part of the agreement authorized US$5 million from the state of Michigan to establish a Michigan-China Innovation Center, a nonprofit that facilitates direct Chinese investment in Michigan by providing connections between individuals, governments, and businesses in the PRC and the state. Under Governor Snyder, Chinese investment has been actively encouraged at the state level in Michigan. Since he took office in 2011, the state of Michigan is estimated to have received US$1.1 billion in investment from China, leading to the creation of over five thousand jobs through 2017.

For Michigan, these collaborative partnerships provide valuable funding to maintain cutting-edge research projects. UM, like most state universities, has faced growing budget cuts in the wake of the 2008 financial crisis.  Chinese funding has helped guarantee that the university can still pay for innovative research. Many of the joint projects listed above heavily emphasize commercial potential to gain access to the China market, and programs like the UM-SJTU JI provide a talent pipeline to Michigan. According to the JI’s website, hundreds of Chinese alumni of the JI went on to attend graduate school at UM from 2010-2015. UM’s joint partners in China, such as the PKU health science center, include some of the best academic institutions in China, and, thus, these partnerships and joint ventures allow American researchers to interact with some of the best researchers in the PRC. Even as the Chinese government has begun to shut down scores of foreign joint-venture universities, UM’s deep and successful ties with its Chinese counterparts (the UM-SJTU JI received an Andrew Heiskell Award for Innovation in International Education in 2014) ensured that its partnerships have not been affected.

Although the Chinese Ministry of Education has not shut down any of UM’s partnerships, these sorts of arrangements are coming under increased scrutiny in the Untied States, particularly as the Trump administration has re-calibrated the American approach to China. The most recent National Security Strategy (NSS) explicitly labels the PRC a “strategic competitor,” highlighting how Chinese entities frequently steal American IP. In addition to illegal procurement methods, the NSS also notes that “some actors use largely legitimate, legal transfers and relationships to gain access to fields, experts, and trusted foundries that fill their capability gaps and erode America’s long-term competitive advantages.”[xiv] Of particular concern to the U.S. government is the possibility that China will gain access to technology and IP with potential dual-use capabilities. The PRC’s “military-civilian fusion” policy encourages Chinese state-owned defense enterprises to acquire foreign companies and technology in a concerted effort to fill the gaps in Chinese domestic technological innovation.[xv] As a result, IP rights and potential national security implications have become a central concern for the U.S. in its trade and investment relations with the PRC.

As the Sino-American trade dispute has intensified, the Trump administration has released a variety of papers, most notably the USTR 301 Report and the White House Office of Trade and Manufacturing Policy Report on China’s Economic Aggression, cataloging China’s unfair trade practices. These reports all hone in on unfair technology transfers, violations of IP rights, and a variety of other forms of questionable or illegal conduct condoned by the Chinese government. They also identify how Beijing has specifically taken advantage of the culture of academic openness in the United States. The White House report quotes the current FBI director stating that “the China threat [is] not just the whole-of-government threat, but a whole-of-society threat on their end, and I think it’s going to take a whole-of-society response by us.” What this means for the future of collaborative partnerships involving Chinese entities, the University of Michigan, and other American universities remains to be seen, but these relationships are likely to face increased scrutiny from the U.S. government.

Elizabeth Bachman is a former Intern of the Project 2049 Institute. She received her B.A. in Political Science and East Asian Studies from Swarthmore College and her M.A. in East Asian Studies with a China concentration at Stanford University. Her main areas of focus are Chinese foreign policy, cross-Strait relations, and Indo-Pacific security issues.

[iii] For an overview of the potential challenges MIC poses to industrial economies, see Jost Wubbeke, Mirjam Meissner, Max J. Zenglein, Jaqueline Ives, and Bjorn Conrad’s “Made in China 2025: The making of a high-tech superpower and consequences for industrial countries,” Mercator Institute for China Studies (MERICS), December 2016,  available at https://www.merics.org/sites/default/files/2017-09/MPOC_No.2_MadeinChina2025.pdf.

[iv] “习近平：深化科技体制改革增强科技创新活力 [Xi Jinping: Deepening Reforms to the Science and Technology System and Enhancing the Vitality of Scientific and Technological Innovation]” People’s Daily, July 17, 2013, at http://politics.people.com.cn/n/2013/0717/c1024-22231248.html.

[xi] “Findings of the Investigation into China’s Acts, Policies, and Practices Related to Technology Transfer, Intellectual Property, and Innovation Under Section 301 of the Trade Act of 1974,” Office of the United States Trade Representative, March 22, 2018, at https://ustr.gov/sites/default/files/Section%20301%20FINAL.PDF.

[xiii] “How China’s Economic Aggression Threatens the Technologies and Intellectual Property of the United States and the World,” White House Office of Trade and Manufacturing Policy, June 2018, at https://www.whitehouse.gov/wp-content/uploads/2018/06/FINAL-China-Technology-Report-6.18.18-PDF.pdf.